I’d never heard of The Yacht Week (TYW), but when a friend invited me to join her 6-person crew, of course my ears perked up. How could a week of sun, sailing, and partying be anything but fun. Add to that, I was intrigued by their chosen location of Croatia, which at the time I admittedly couldn’t locate on a map and knew little about. Once I learned that Croatia sits on the Adriatic Sea (directly across from Italy) and is speckled with numerous islands and historic towns which we’d explore, I was ready to go. 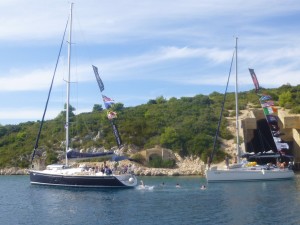 Since I had to wait six months until we set sail, in advance of the trip I read numerous articles and blog posts to try to learn what to expect. I didn’t see many people of color so I wondered how we’d be received. But I’m always one for an adventure so I wasn’t deterred. Good thing, because it was an incredible experience I’ll never forget.  (Click here to read all about my TYW adventure.)

But despite having read everything I could find about The Yacht Week, there were some things I was not prepared for. I share them below in what I call “The Good, The Bad, and The Ugly”. For those like me, who like to know everything good and bad, hopefully this post will give you a full picture of TYW (warning: “The Ugly” is real talk and may be TMI for some people). I mention any complaints in the interest of full disclosure (not to be a whiner) and any views expressed are mine alone.

Make no doubt about it, The Yacht Week was amazing and at times I felt like I was in a dream. I met diverse people from all over the world, repping their country’s flag and uniting in the pursuit of fun. I spent seven wonderful days sailing on beautiful, calm, blue waters and reveling in Croatia’s beauty. I partied for seven nights on land and at sea with new and old friends. I swam in the sea in a yacht-formed pool and rode a paddle boat inside the famous blue caves. I ate delicious Mediterranean cuisine and deserts (I highly recommend the lamb peka, Croatia’s national dish, and the gelato) and drank a lot of wine, liquor, and rakija (Croatian herbal brandy). Plus, I was treated to the warm hospitality of the Croatian people. The Yacht Week definitely lived up to its tagline “It’s Nothing Like the Real World”. 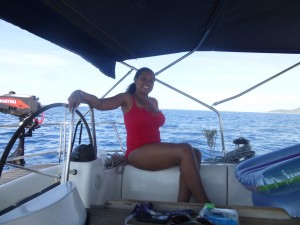 By the way, although we chose Croatia, there are a variety of locations and yachts at different price points, so just about everyone can find a deal they can afford. Our crew chose a 50-foot yacht (one of the largest boats) and paid approximately $1,300.00 per person, which included the yacht charter cost, yacht equipment, skipper, TYW wristbands, bank fees, taxes, and cleaning fees. We also paid additional costs of about $200.00 per person for port fees, fuel, water, groceries, skipper meals and tips (not including water taxis or restaurant meals, which we separately paid). Yeah, it was pricey, but overall it was a good value.

The first “bad” occurred when we arrived at the Kastela marina in Croatia. We’d been told we’d have to sign paperwork during registration on our Saturday arrival day. What we weren’t told was that there would be several 20+ page contracts with waivers requiring you to absolve The Yacht Week, the skipper, and any related parties of nearly all liability. There was no mention of the waivers on the TYW website (at least not at the time of our booking or sailing). On top of that, there was a $2,000.00 deposit, which luckily was payable by cash or credit card. Personally, I think those contracts should be made available for TYW participants to review at the time of the initial reservation, so they can make a fully informed decision whether to participate. Although everything turned out fine, I was quite annoyed at the time because I felt like we were ambushed. The lawyer in me likes to thoroughly review such contracts before I obligate myself.

Another thing I didn’t like was the inconvenience and cost of the water taxis. On several islands we were unable to dock at the marinas and instead anchored at sea, necessitating the use of water taxis to transport us to and fro. Those costs were in addition to the yacht rental fee and quickly added up after several trips. Plus, there were not enough TYW-sanctioned water taxis to transport everyone at the same time and on several occasions we had long waits. It was frustrating because there were other water taxis available but they wouldn’t take us. 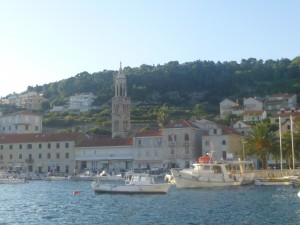 One more gripe was with the obvious discontent between the island of Hvar and TYW participants. Unfortunately, because prior Yacht Weekers misbehaved, the reputation of The Yacht Week has been soured in Hvar. Although it was not the case with everyone, several vendors looked at our TYW wristbands and showed obvious disgust at our presence. The bouncer at one nightclub told us “no Yacht Week” and refused us entry. It’s too bad because Hvar is a lovely place and the poor reception soured the experience. Hopefully, this relationship can be mended in the future.

My biggest gripe was with the music; only house/techno/electro music was played at TYW parties. Although I like electro, it got old after several days. With so many diverse countries represented at The Yacht Week, it would have been cool to hear genres from each country — like some reggae from Jamaica, axé from Brazil, and hip hop from the USA (hint, hint, hint).

After several days, the novelty of living on a boat wears off. Forget about long, hot showers; you must get in and out quickly to preserve the limited water in the on-board tanks, and the water may not always be warm. You’ll treasure the few times when we dock at marinas with on-site showers (though you will also wait in line for a real shower). There will be no flushing toilets on board for a week; toilet waste is emptied using a hand or foot pump. Used tissue and feminine products go into a nearby plastic bag for later disposal at dockside (tissue can’t be flushed due to the marine plumbing system). The cramped quarters and small beds will become uncomfortable (even though you won’t be sleeping much), and if your boat doesn’t have A/C, it may get hot below deck during the day. 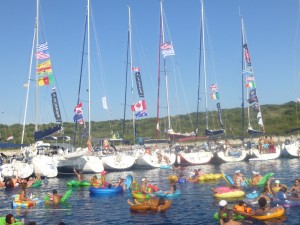 By now, you get the point. There’s a trade off to living the good life. Make sure you have a cool group of people on board because you’ll be in close quarters for seven days and nights. But being on the water is wonderful and you’ll have so much fun that it will be all worth it. Anchors away!

Have you been on The Yacht Week? What did you like or dislike? Share your comments below.