My last post ended at the Lesotho border after an adventure on the Sani Pass. Once we crossed into Lesotho, I felt like I had traveled back 100 years in time. It was largely rural, with big open fields and no modern buildings. The mountain terrain was breathtaking and the air was noticeably pure and pollution-free. I sucked in several deep breaths and marveled in it, realizing just how accustomed we’ve become to pollution. We drove past farmers tending to crops and shepherds herding goats and sheep. I was surprised to see Chinese construction trucks and workers installing a massive tar road throughout the country. It was a stark contrast to the rondavels and shepherds dressed in traditional Basotho hats and blankets. 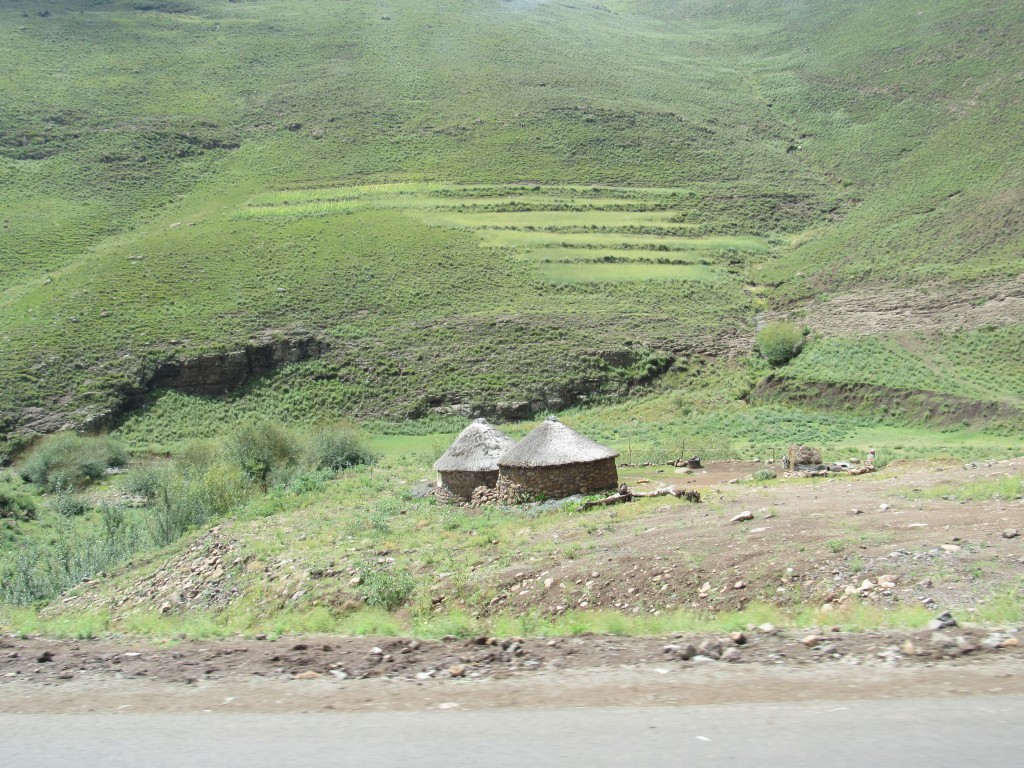 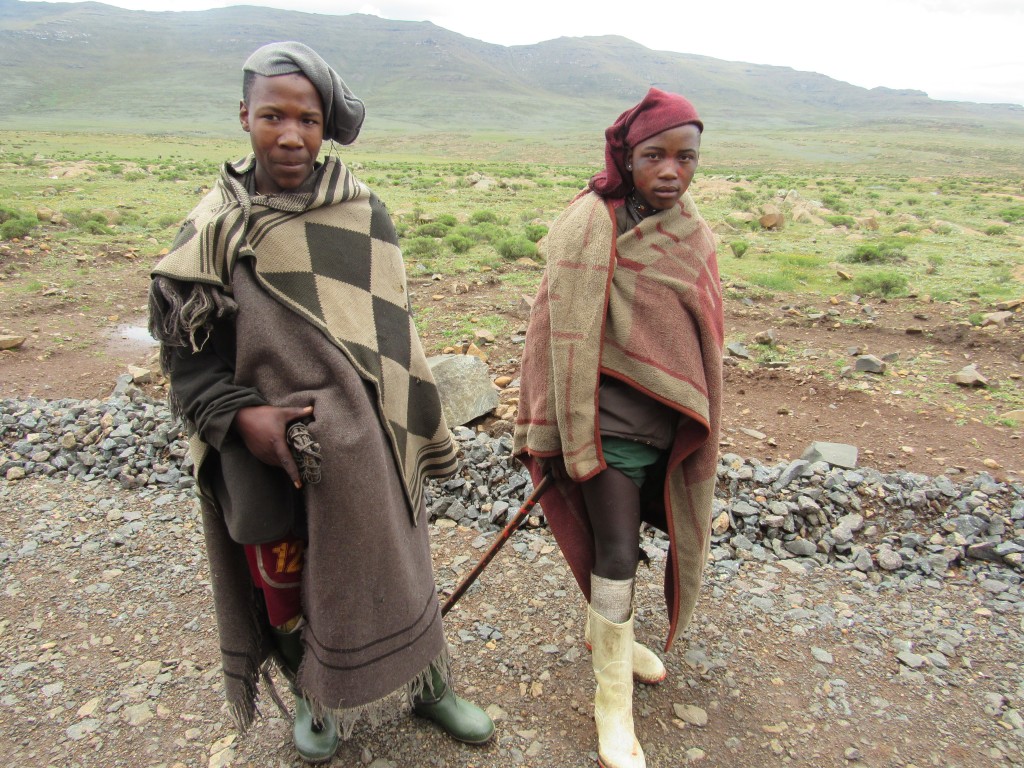 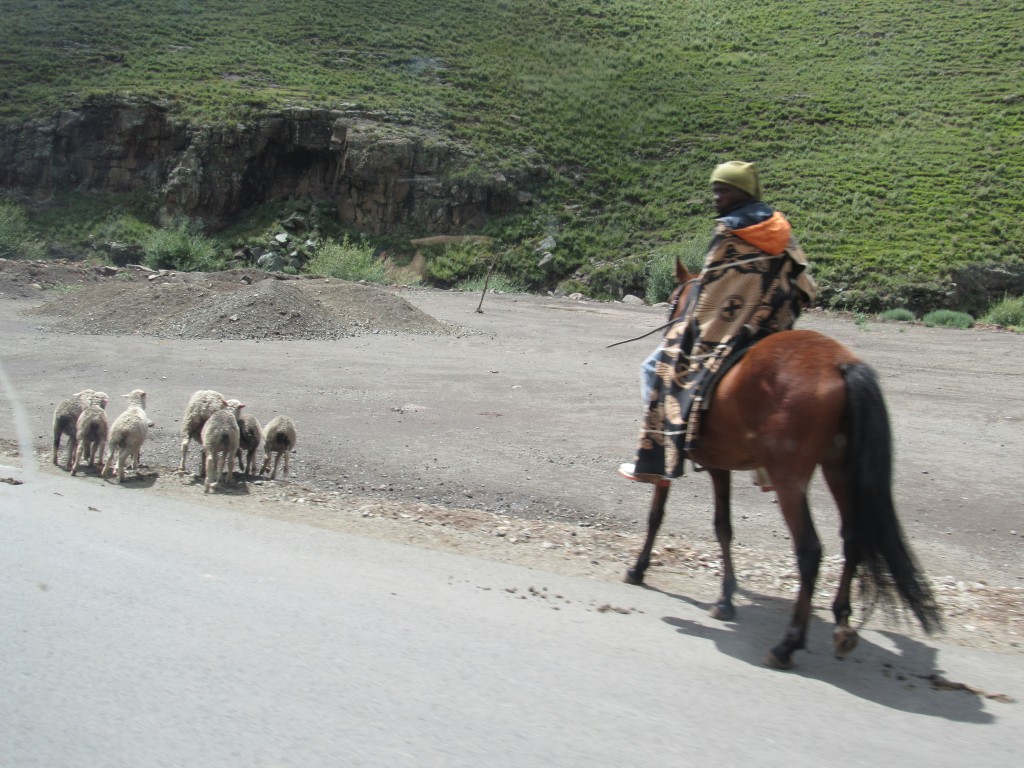 About 45 minutes later, we drove up to the village and were introduced to our host, MaNkune (pronounced Ma – IN – ku – nee) and her family. We had learned a few words of Sesoto on the ride over, so we greeted them with Dumela, the Sesoto word for Hello. Lucky for us, MaNkune spoke English in addition to her native language so we didn’t have to struggle too much. After exchanging pleasantries, she showed us the hut that would be our home for the next two days. It had been specially built for guests, so it was larger than their normal huts. It was also constructed of mud and concrete, rather than the usual mixture of mud and cow dung, to improve its durability. There was a dormitory-style bedroom with 4 bunk beds, a small living room with sofas and a chair, a dining room with a buffet table, china cabinet, a round table and chairs, and a meal preparation room. Noticeably absent was a bathroom, electricity and running water.

Next, we were shown the outhouse which served as our bathroom. It was constructed of corrugated tin and had a long drop toilet. This was my first experience with an outdoor toilet and I was glad it at least had a seat cover so I wouldn’t fall down the 10 foot hole. Close to the outhouse, was a 5-gallon water bottle with a spigot, which was used for hand washing, teeth brushing, or other personal needs. MaNkune told us that if we wanted to bathe, we could go down to the nearby river. There were other kids and adults already there washing clothes. I guess I’m more of a prude than I thought, because I quickly decided that I probably would not be bathing there. 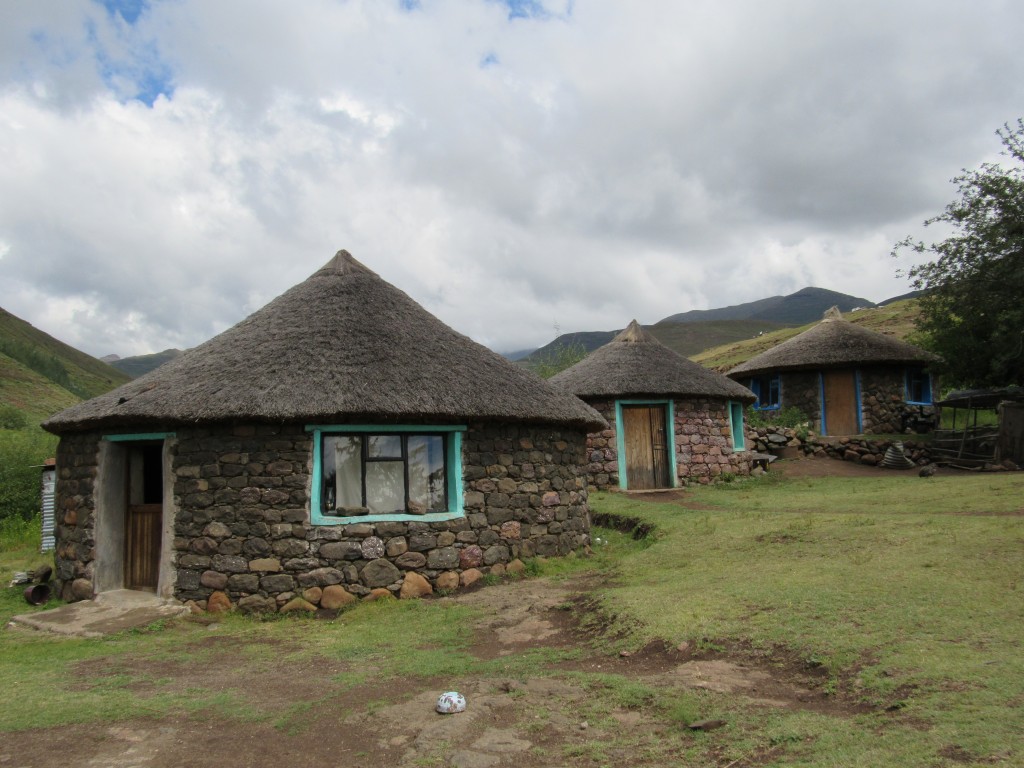 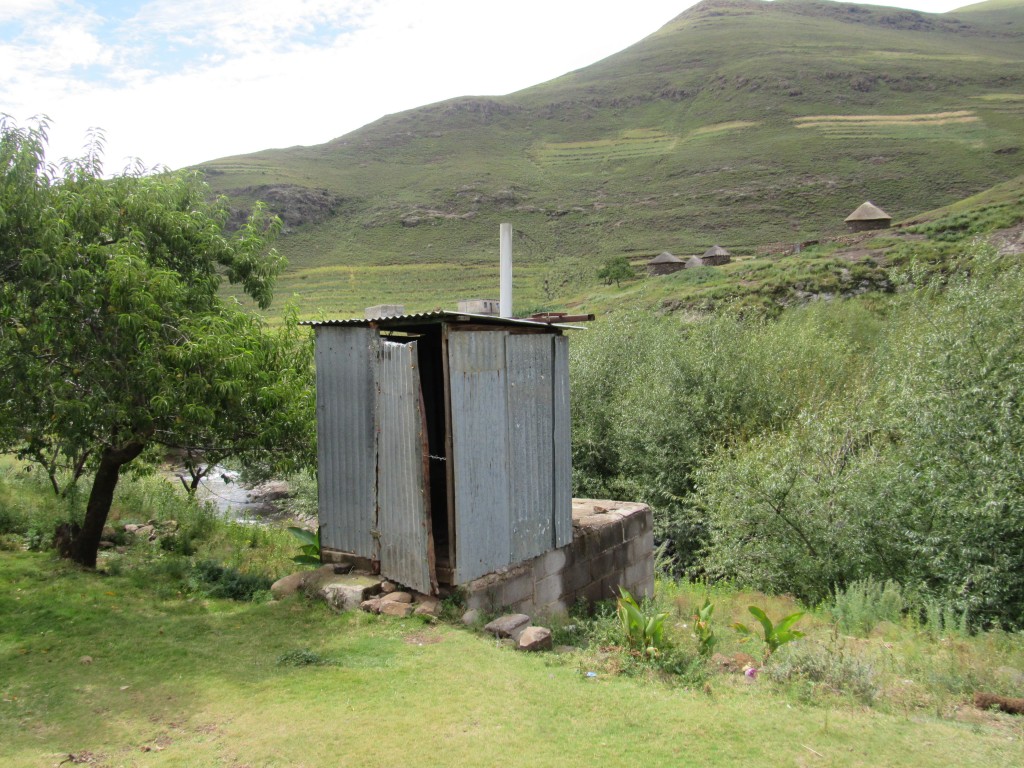 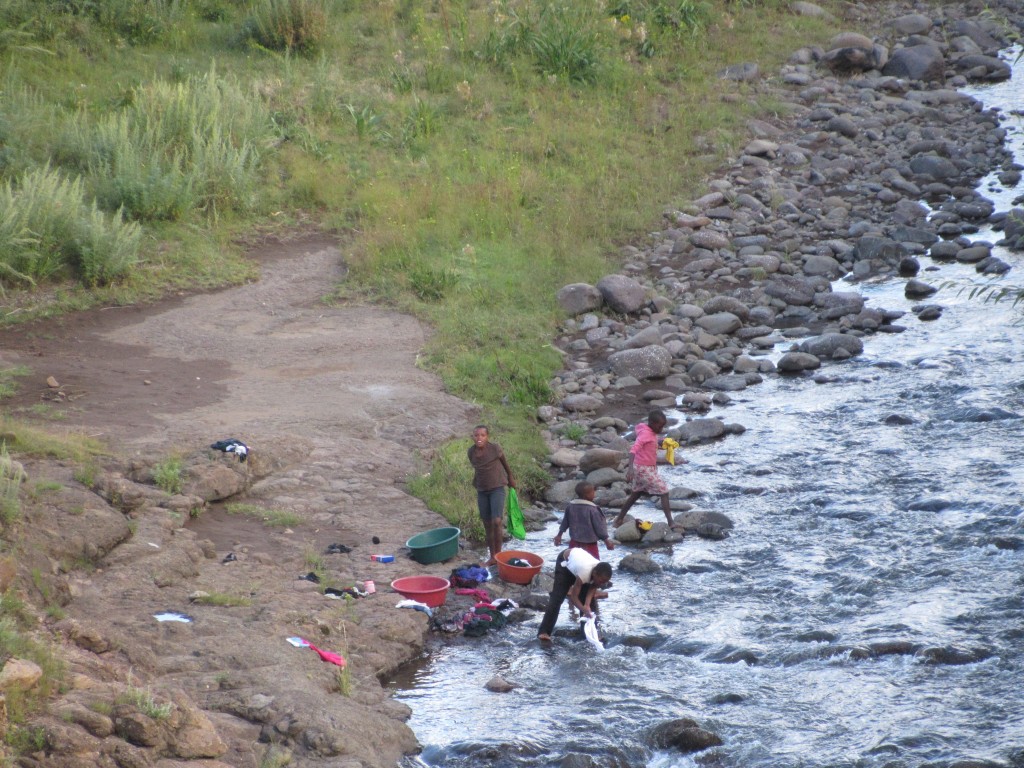 Locals washing clothes in the river

Later, we took a walking tour of nearby highland villages to get a firsthand view of how the Basoto people live. We greeted residents who were out and about, especially the kids who were excited to see us, and were amazed at how they live nestled in the mountains. Next, we were taken to the women’s gathering hut. We met with about 10 ladies who shared their cultural practices and displayed some of their artifacts and crafts. They explained how they meet as a group to do women’s chores, usually related to the preparation of food. They showed us how to grind dry corn kernels by hand with large rocks, all while dancing in their seats and singing traditional songs to kill the monotony. They let us join in, and let me tell you, it definitely required some muscle work. 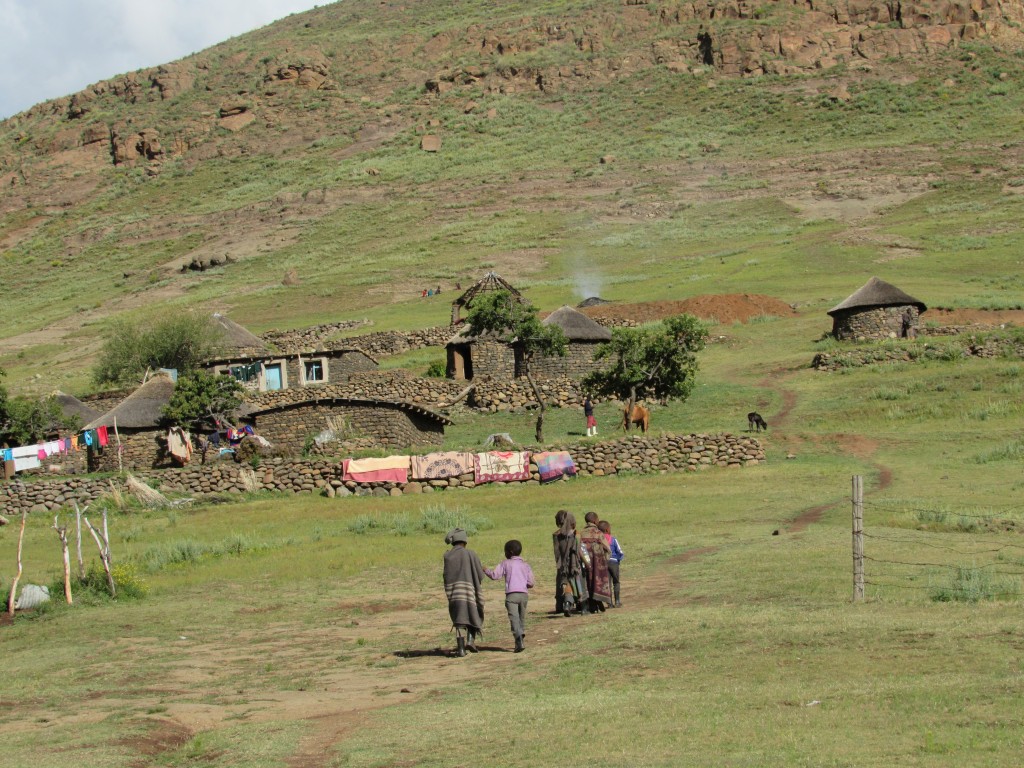 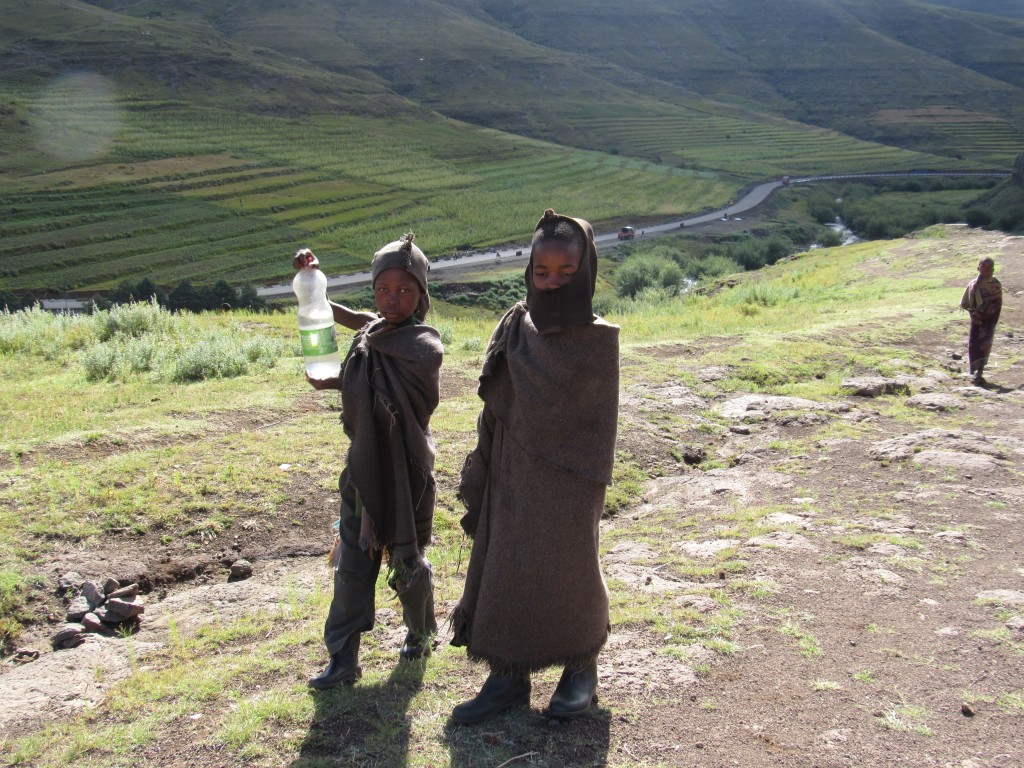 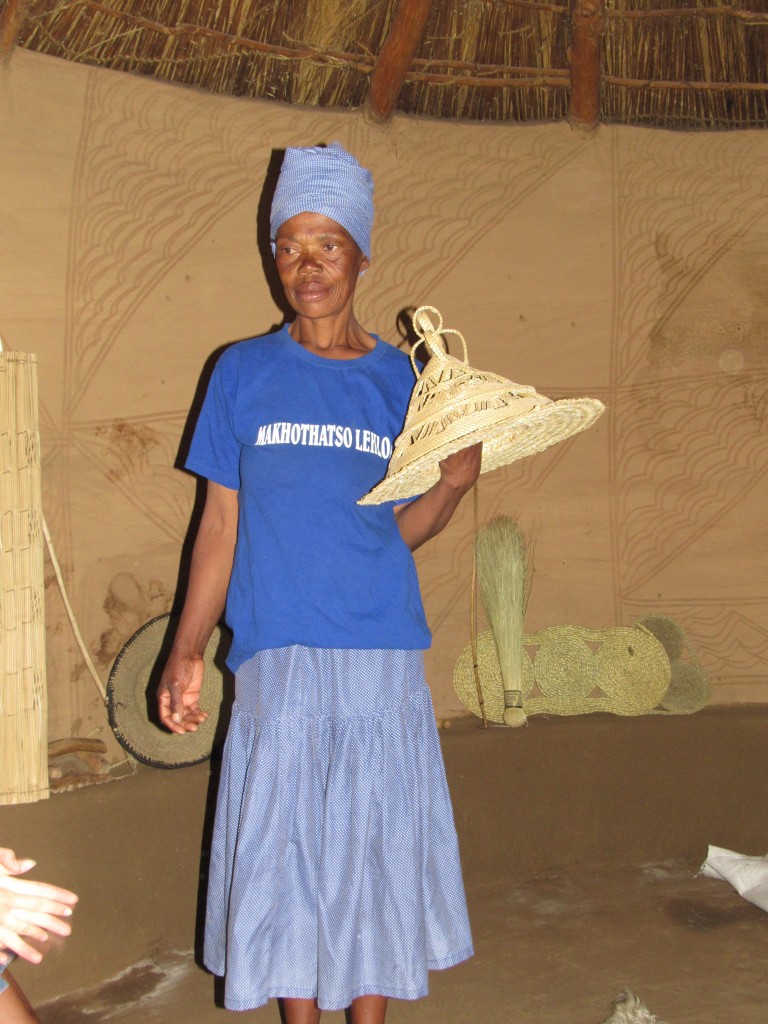 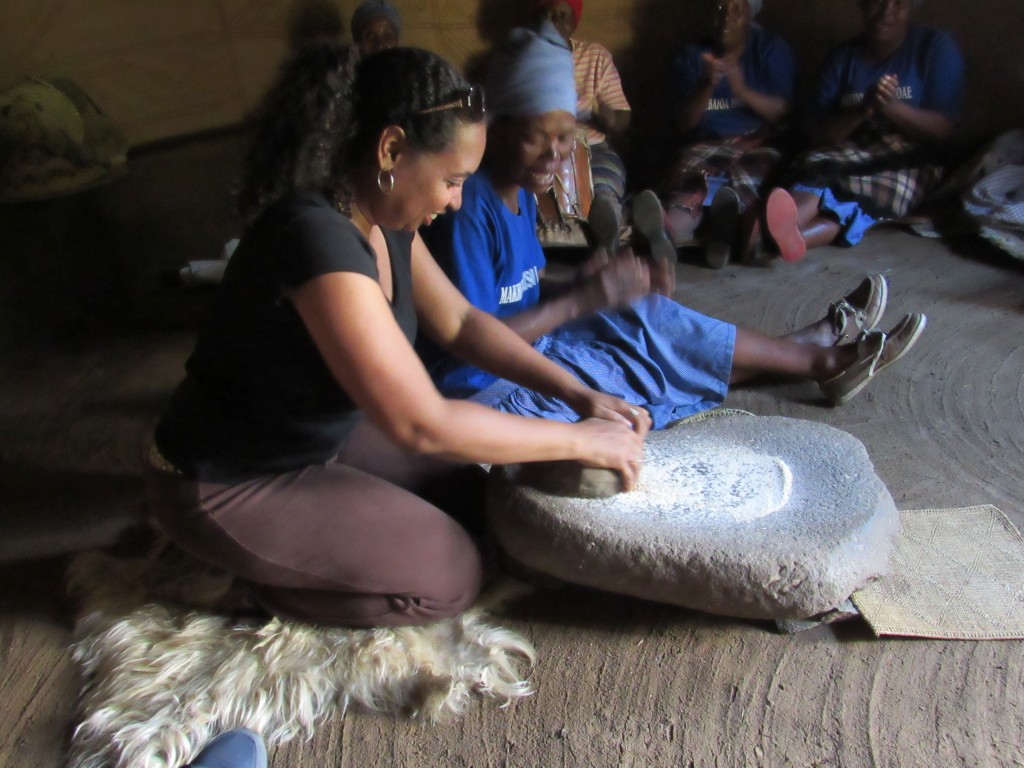 Me grinding corn into maize meal

After the cultural presentation, we returned to our hut to relax. MaNkune and other female family members had started prepping for dinner. Since they don’t have electricity or stoves, they cook over an open fire in outdoor kitchen. As they prepared the meal, we were treated to a traditional dance show by some of the village men and women. First, the women performed their traditional dance with skirts made of grass and bottle tops. They sang and shook their hips, making musical sounds with their skirts. I tried it myself and learned it wasn’t as easy as it looked; those skirts are heavy!  Next, the men did a gumboot dance with accompanying music played by two young men with a sekhankula, a handmade violin-like instrument. By the time the show ended, it was dark outside and time for dinner. 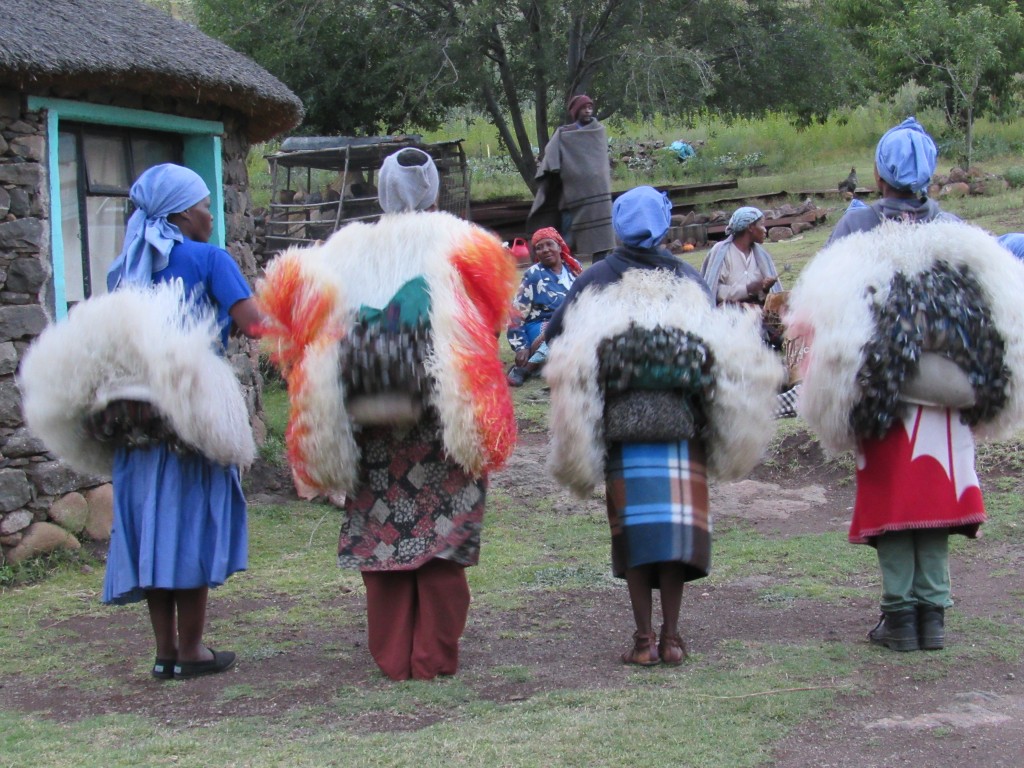 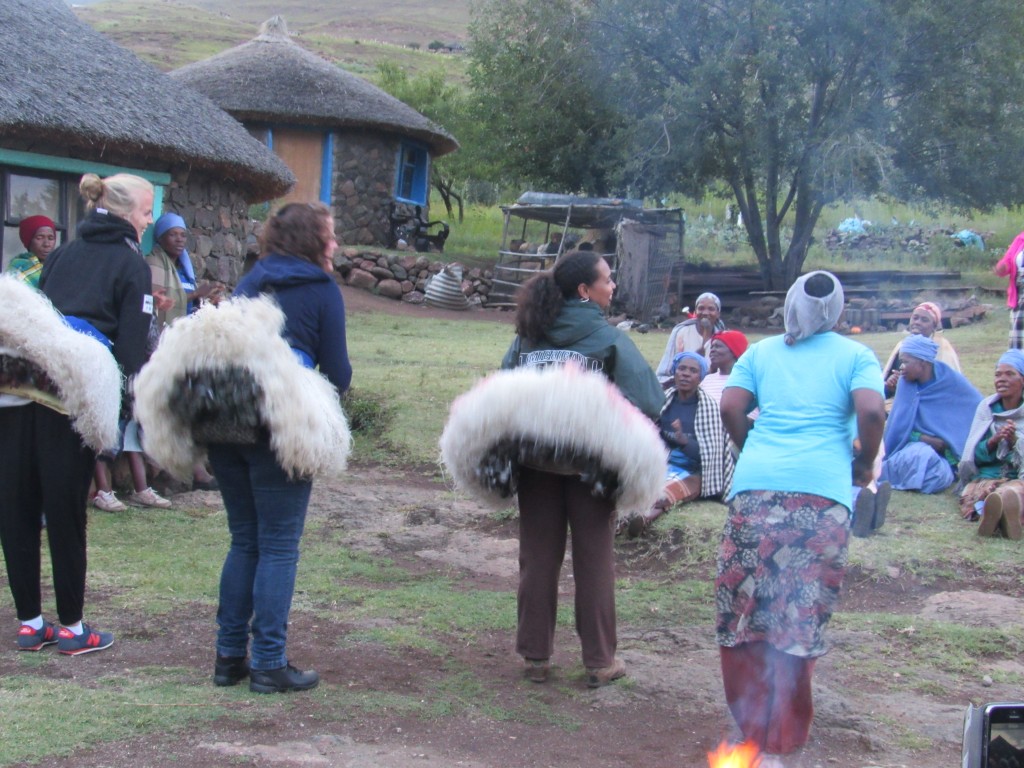 Me giving the traditional dance a try 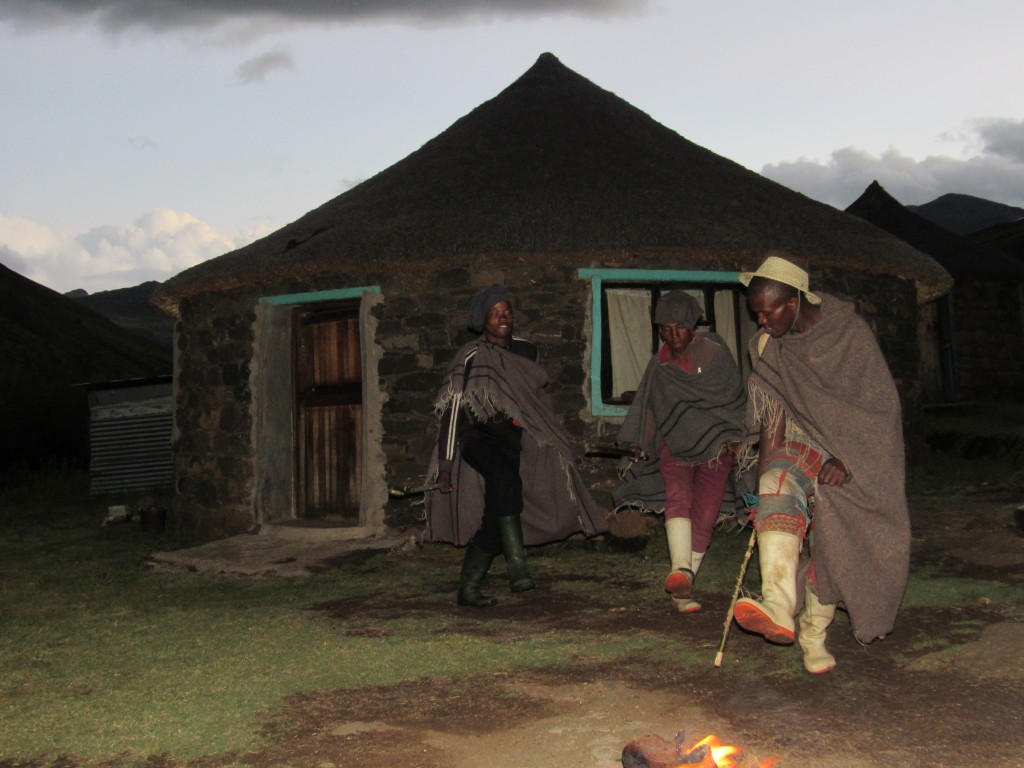 We had dinner by candlelight inside our hut. We ate sausage, pap (a corn porridge) topped with a tomato sauce with peppers and onions, potatoes and greens. Everything was fresh, tasty and flavorful. After dinner we drank tea and coffee, and talked about our respective countries and travels, before finally settling in to bed around 9:00 pm. I was afraid I wouldn’t be able to sleep, but to my surprise I slept like a baby through the night. The funny thing is that even without the creature comforts I’m used to, I felt a sense of peace and relaxation there, like all of life’s stressors were gone. 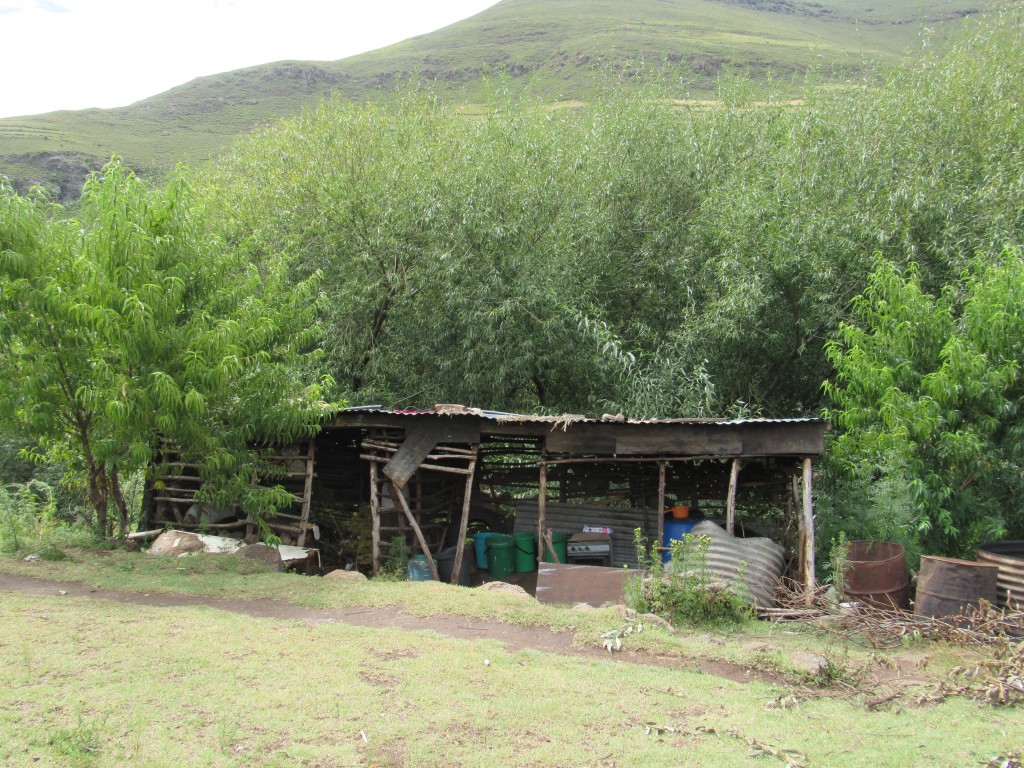 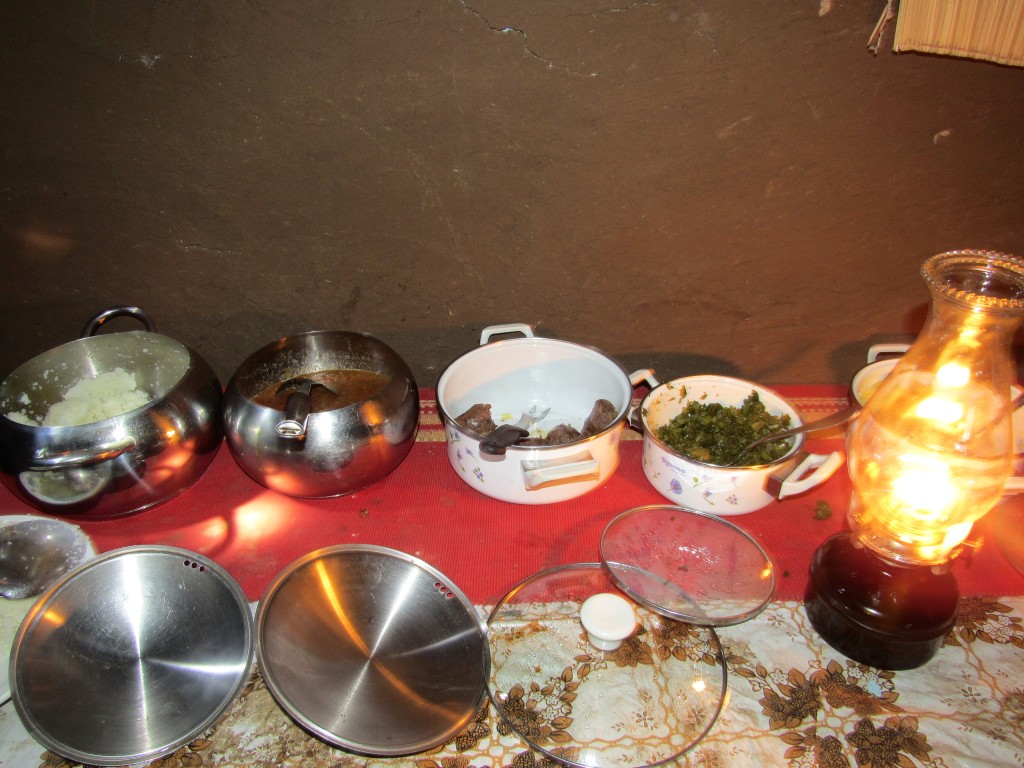 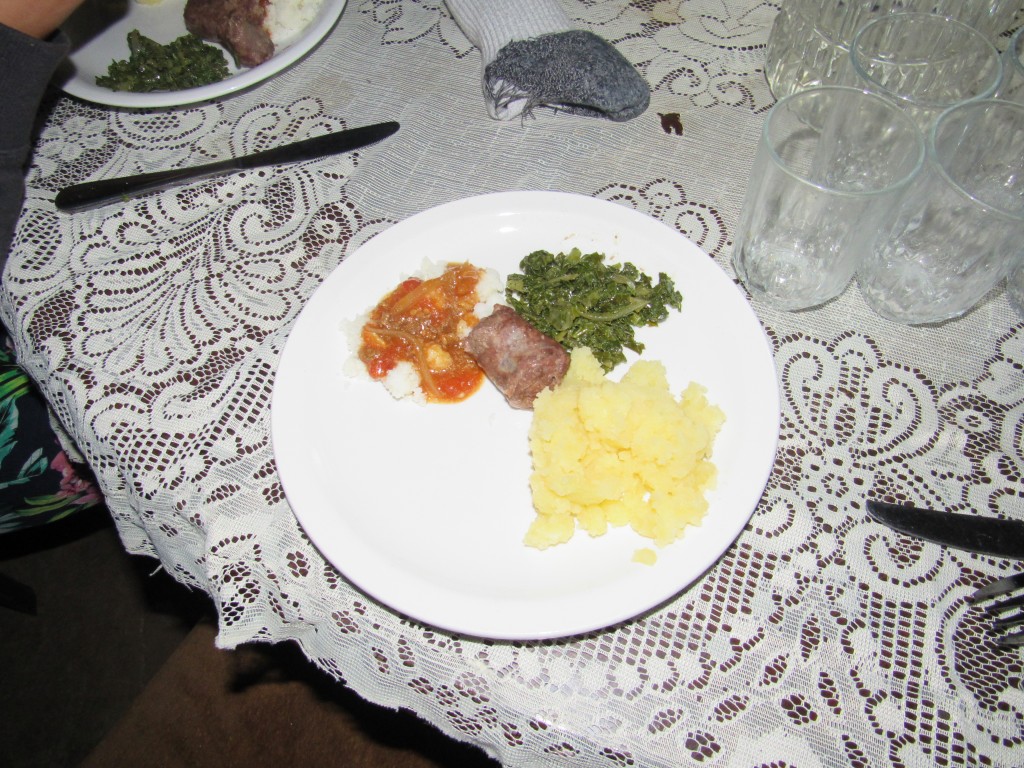