On Day 2 , I woke up around 7:00 am, refreshed and ready to start a new day in Lesotho. I made up my bed, then headed outside to the water spigot to wash my face and brush my teeth, and reluctantly use the outhouse (I must admit that was the least favorite part of my visit). I looked out at the river and briefly contemplated going down, but the idea of taking a nude bath out in the open in cold river water just didn’t appeal to me. I snickered at my spoiled American self and decided to wait until I got back to a real shower that evening. 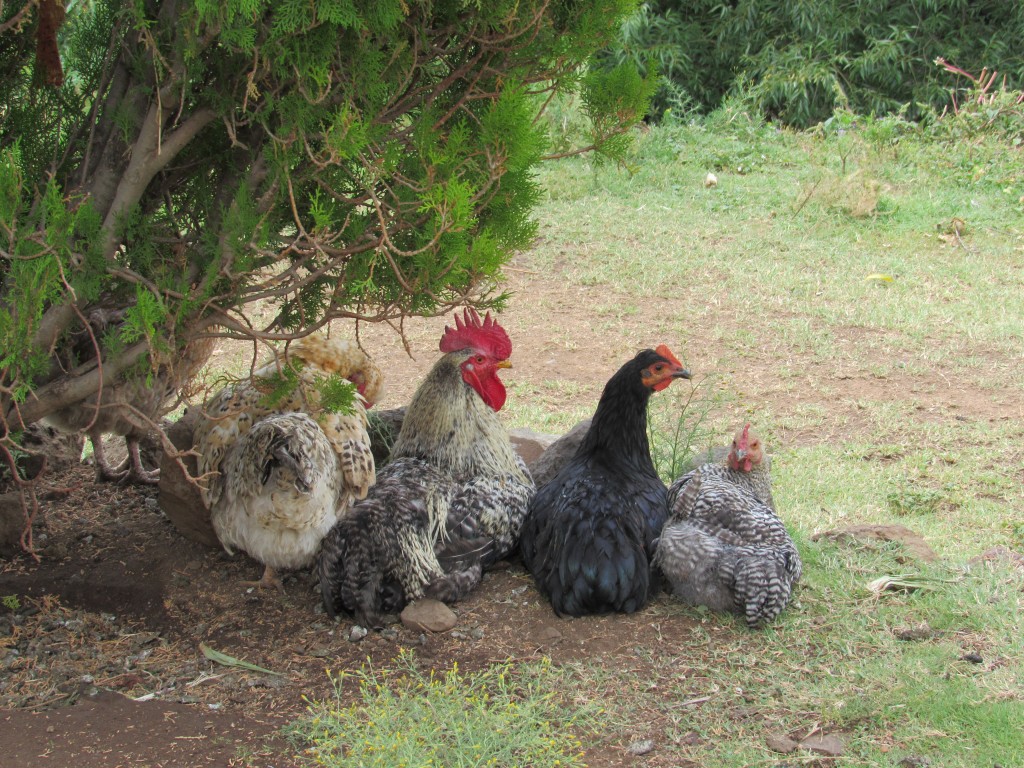 Our hosts had already been up preparing our morning meal and it was ready to go by the time we were done with grooming. We had homemade bread with butter and jam, boiled eggs (freshly laid by the village chickens), and coffee and tea. After breakfast, we sat around relaxing while waiting to go pony trekking. In the absence of working cell phones and computers, we had to talk to each other for entertainment. It reminded me of a time when we weren’t so attached to social media. 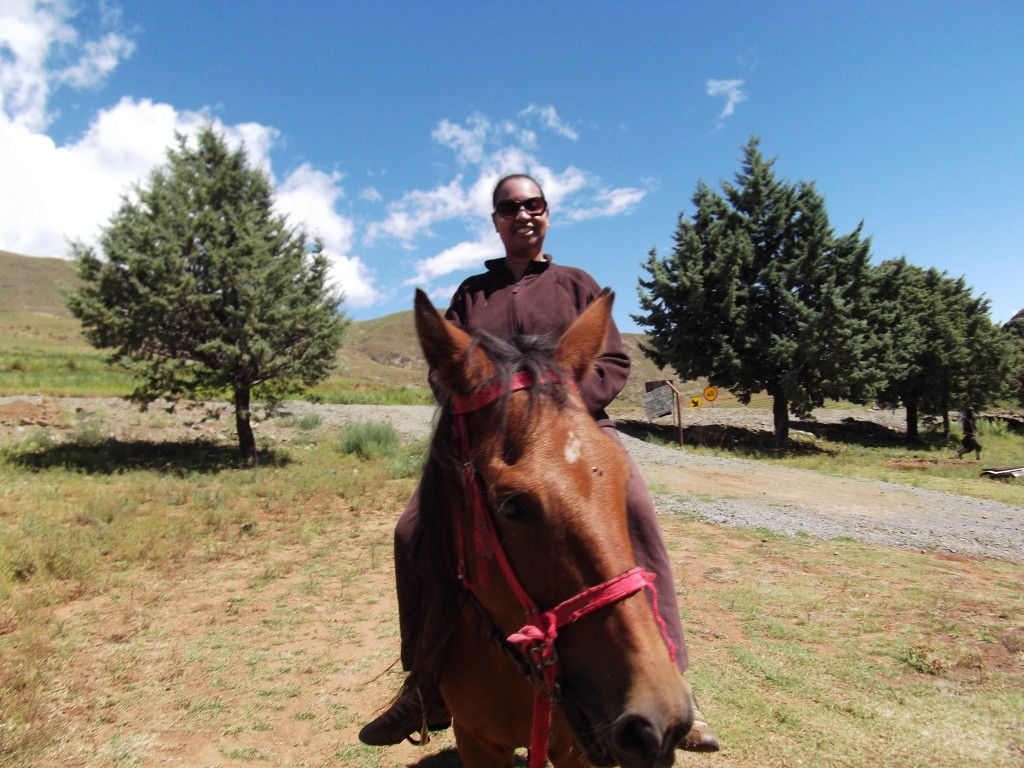 Me riding a Basotho pony

Our two guides finally arrived around 10:00 a.m. with six Basotho ponies. Although Basotho ponies are characteristically smaller than horses, I still had some difficulty with mounting (after all, I’m only 5’1″). After several attempts and a bit of assistance, I finally made it up on the saddle. Following a quick briefing on the pony’s disposition and how to maneuver the reigns, we took off headed on a trail up the mountains. I was nervous at first, as this was my first horseback ride, but I quickly relaxed and savored the feeling of complete freedom and exhilaration. It’s true that pony trekking is the best way to see Lesotho. 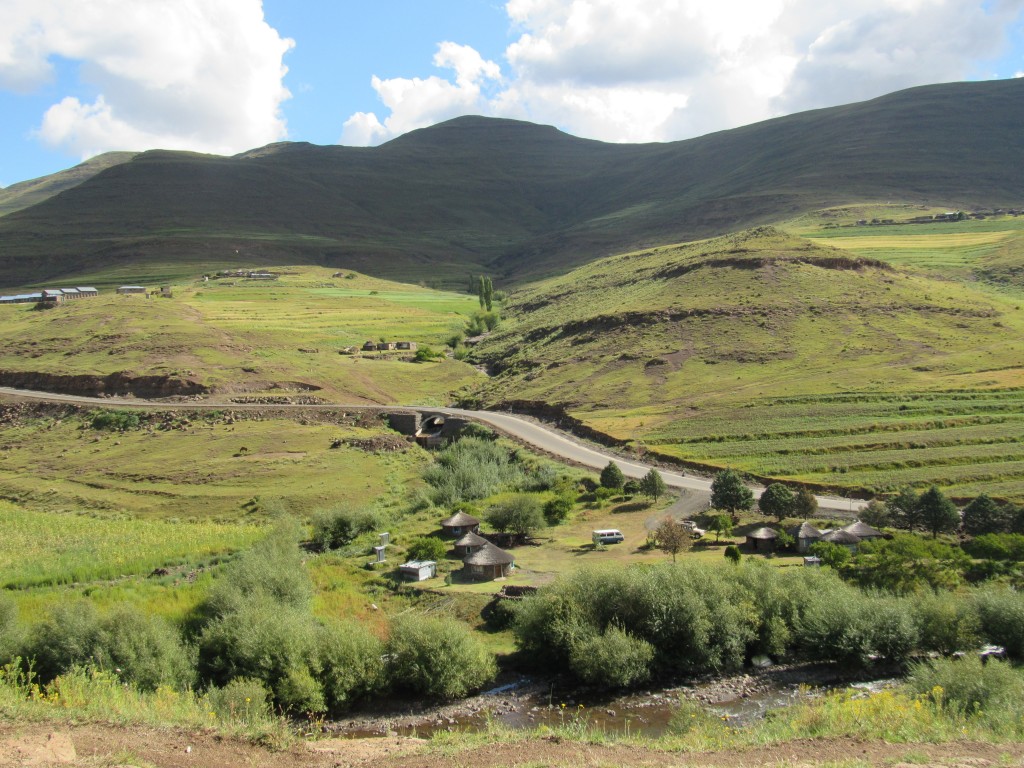 The ponies effortlessly climbed up and down the mountains dodging narrow trails, loose rocks, and rugged terrain. As if the views from the ground weren’t beautiful enough, the views from the mountain tops were just breathtaking. We rode for more than 2 hours, visiting several new villages along the way and getting a bird’s eye view of how the Basotho people live. The people were friendly and welcoming despite our unexpected intrusion into their space. The kids were especially excited to see visitors and ran alongside us waving and screaming hi. 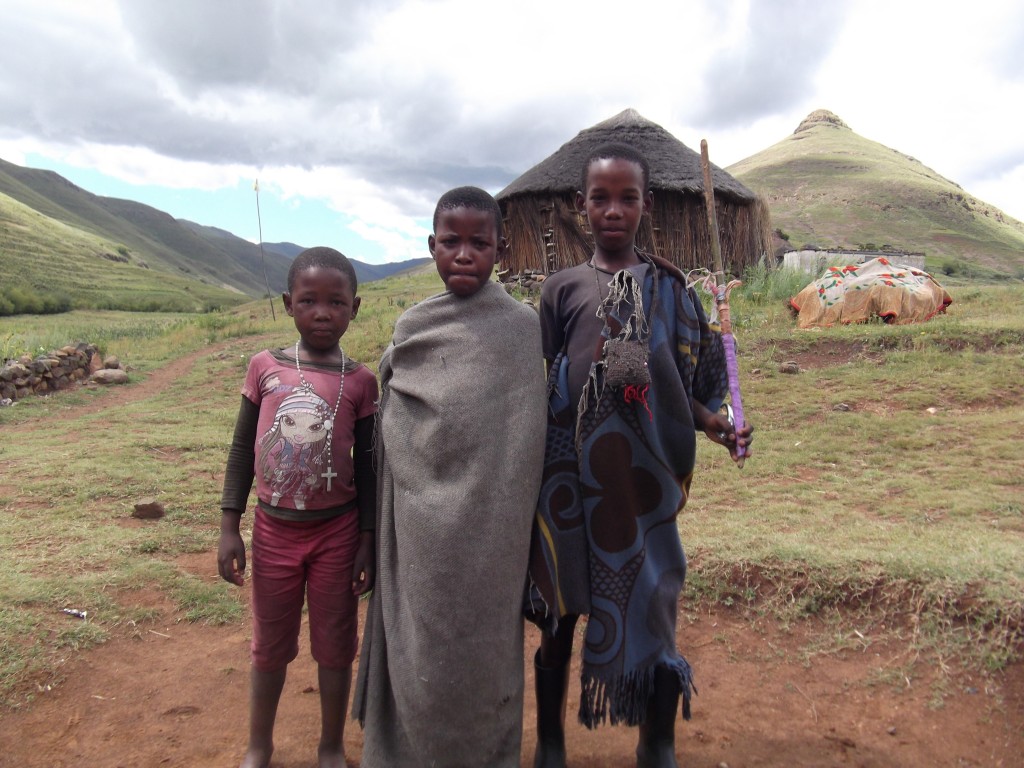 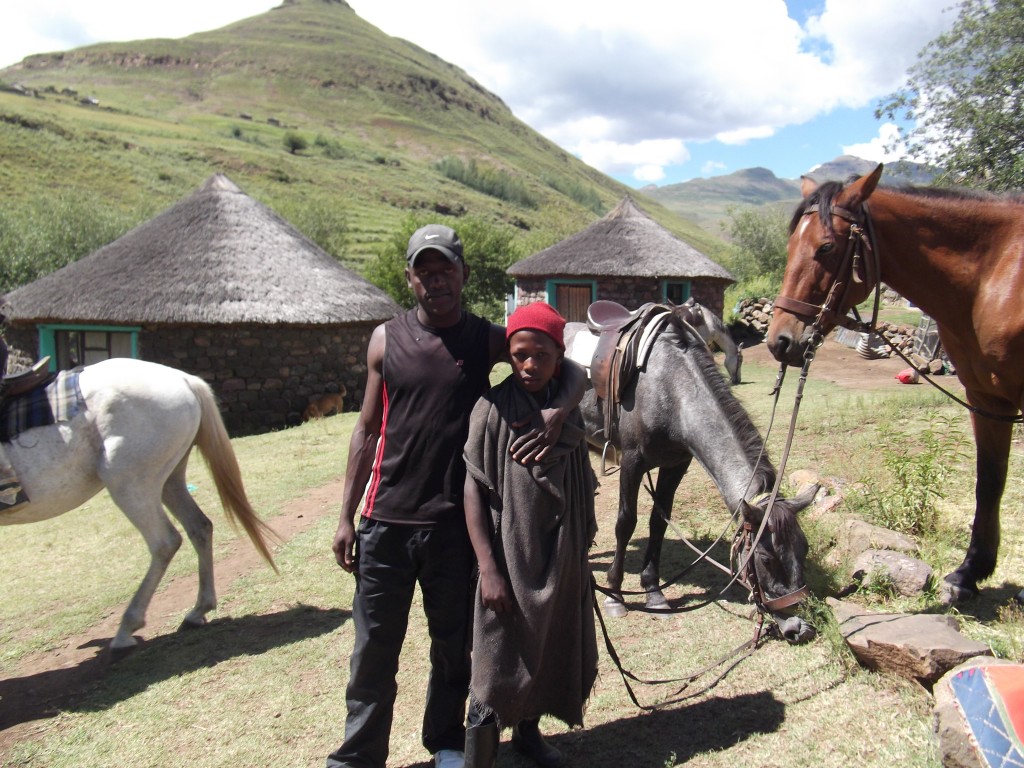 Our guide and his helper

We returned to our village around 12:30 p.m. Some younger kids had come by to assist with the ponies. We chatted about the ride and showed them photos on our digital cameras. They were fascinated by the ability to instantly see pictures, and of course, they wanted us to snap their photos too. By then, we had built up an appetite and were glad lunch was ready. Our hosts had prepared fried chicken, rice with red sauce, carrots with onions and peppers, and potatoes, all of which was fresh and delicious. 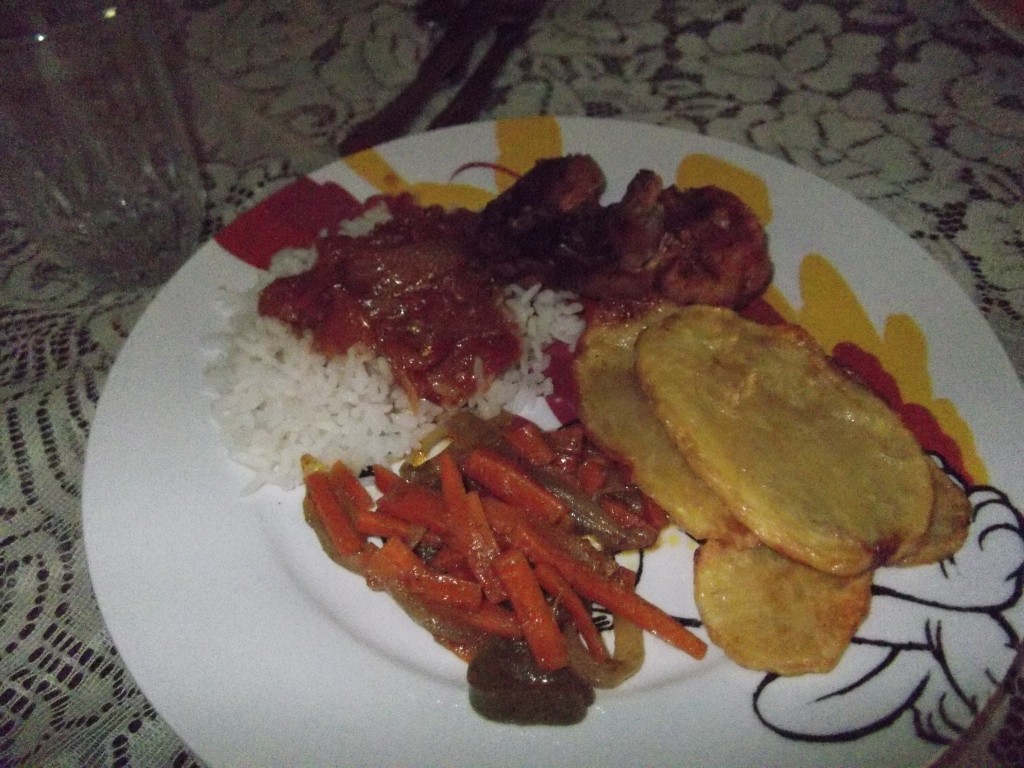 After lunch, we walked to a nearby village to visit a sangoma (medicine healer), who surprisingly was a woman. She greeted us and welcomed us into her hut, after we removed our shoes which we left at the front door. The sangoma spoke limited English so our host, Mankune, translated for us. While Mankune explained the role of sangomas in Basotho culture, the sangoma stepped outside the hut to change into her ancestral garb, which included a cape, a fur hat, a beaded wig, a whistle, shell arm and ankle bracelets, and shell necklaces wrapped around her upper torso. When she returned, she set up a makeshift altar with candles, incense and a bottle of water. While her grandson played the drum, she sang, danced, chanted and said several prayers in an effort to channel the ancestors for our readings. Once she completed her ritual, she had all of us exit the hut and return one at a time for individual readings. 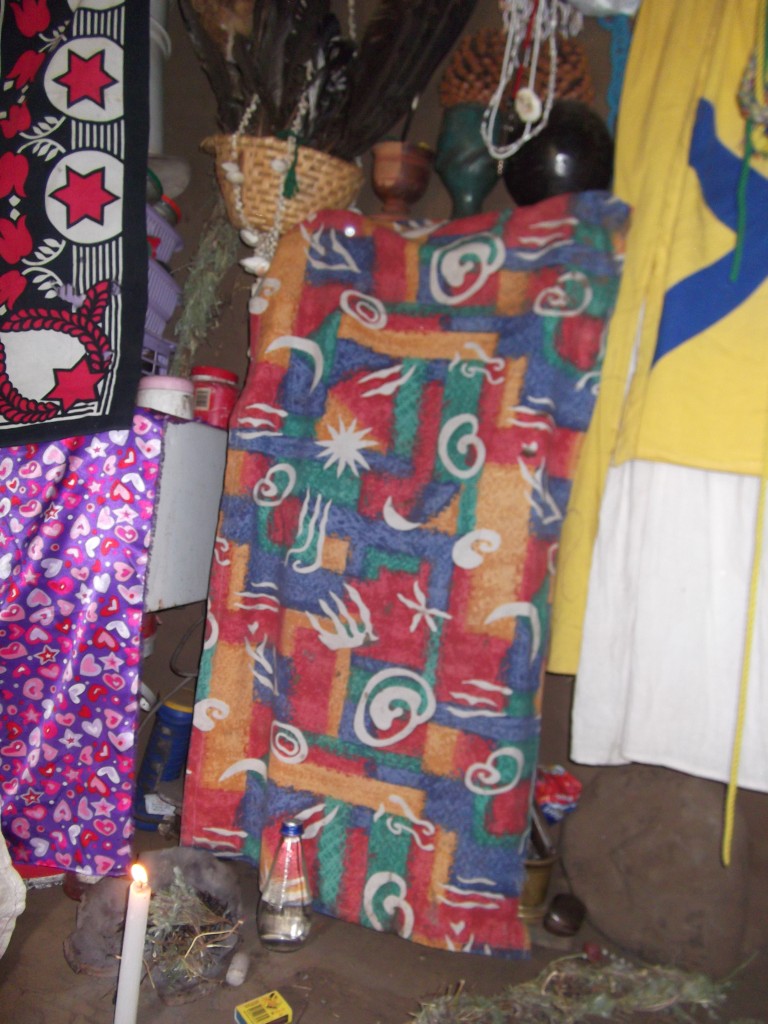 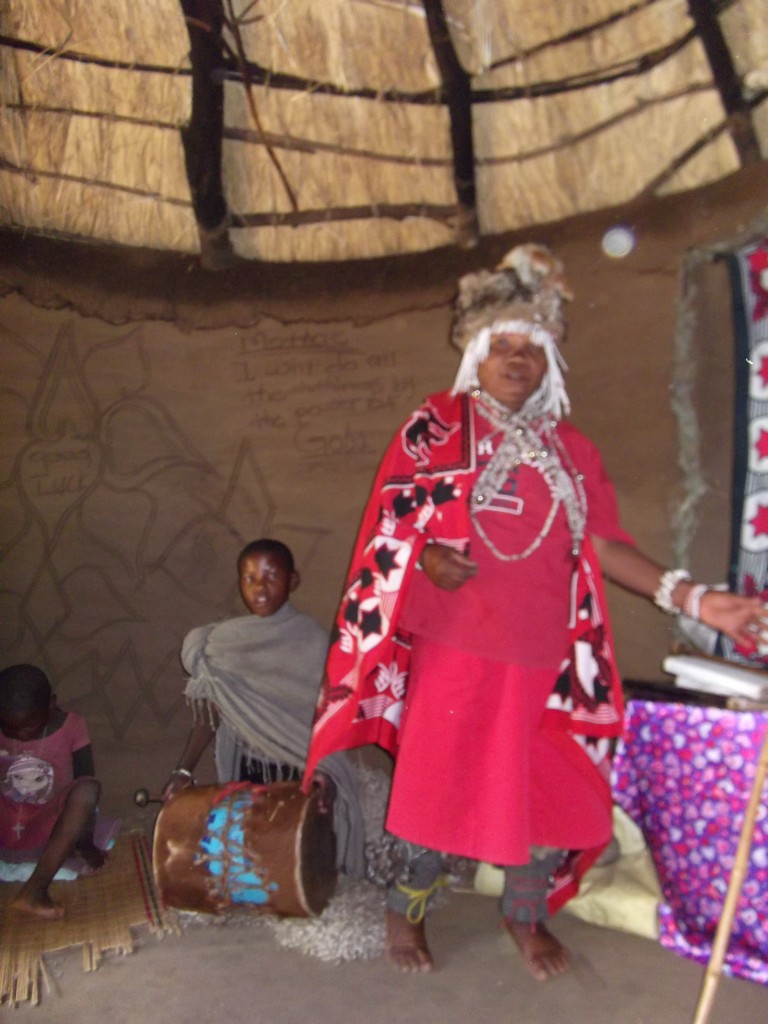 I went third and entered the hut with 20 rand (approximately $1.75 at that time), which I placed near the “altar”. She blessed the money as an offering to the ancestors, who she said provide her with advice, guidance, and the ability to interpret dreams. She said a prayer for me, then told me I would be healthy and I would be married and have two children in the future. She also said I would meet my husband in the USA, we would start a business together, and then we would move abroad. After my reading was done, I said Kealebua (thank you in Sesotho) and exited the hut. The sangoma’s grandkids were outside waiting and we talked and played until she was done. After she finished her last reading, she let me wear one of her fur hats and we took photos together before saying farewell. 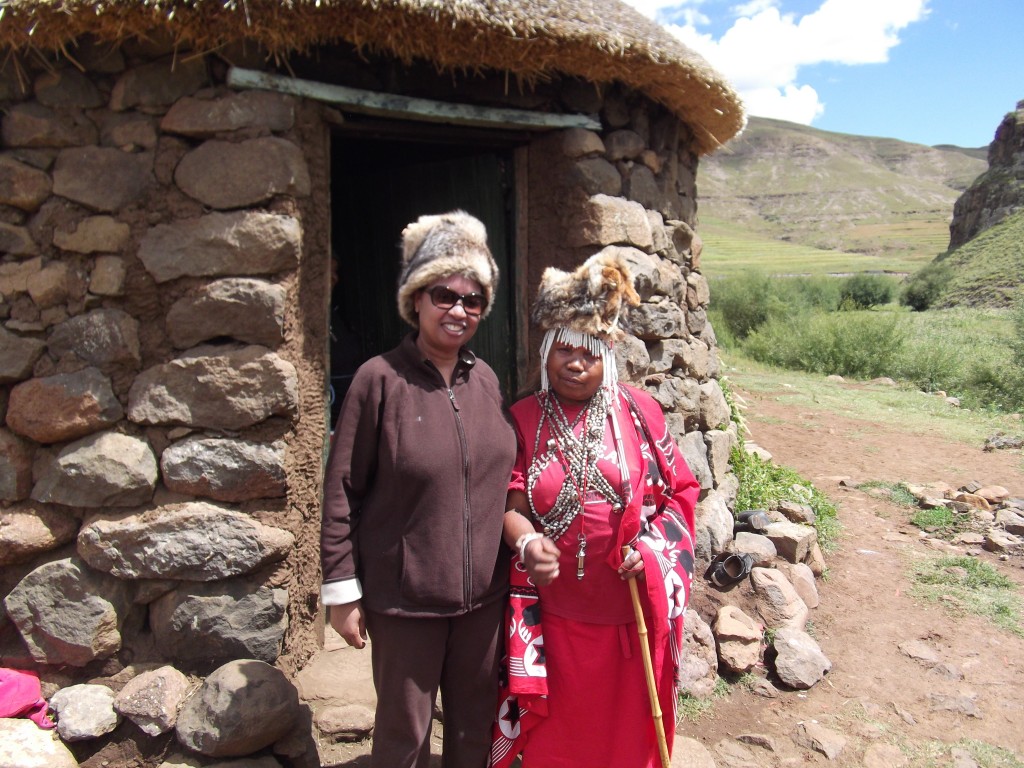 Me and the sangoma

We returned to our village, packed up, and said goodbye to Mankune and her family before heading out in late afternoon. On the way back to the Lesotho border, we stopped for a drink at the Sani Mountain Lodge, the highest pub in Africa at 2874 meters (9429 feet). Unfortunately, a thick cloud cover had descended on the lodge, completely obscuring what I was told are fabulous views from their deck. That same cloud cover made our return ride on the Sani Pass a bit harrowing, as the visibility was near zero for the first 20 minutes. Thankfully, it cleared up once we got to lower elevations and we made it back safely to our hotel in time for dinner (and a hot shower). 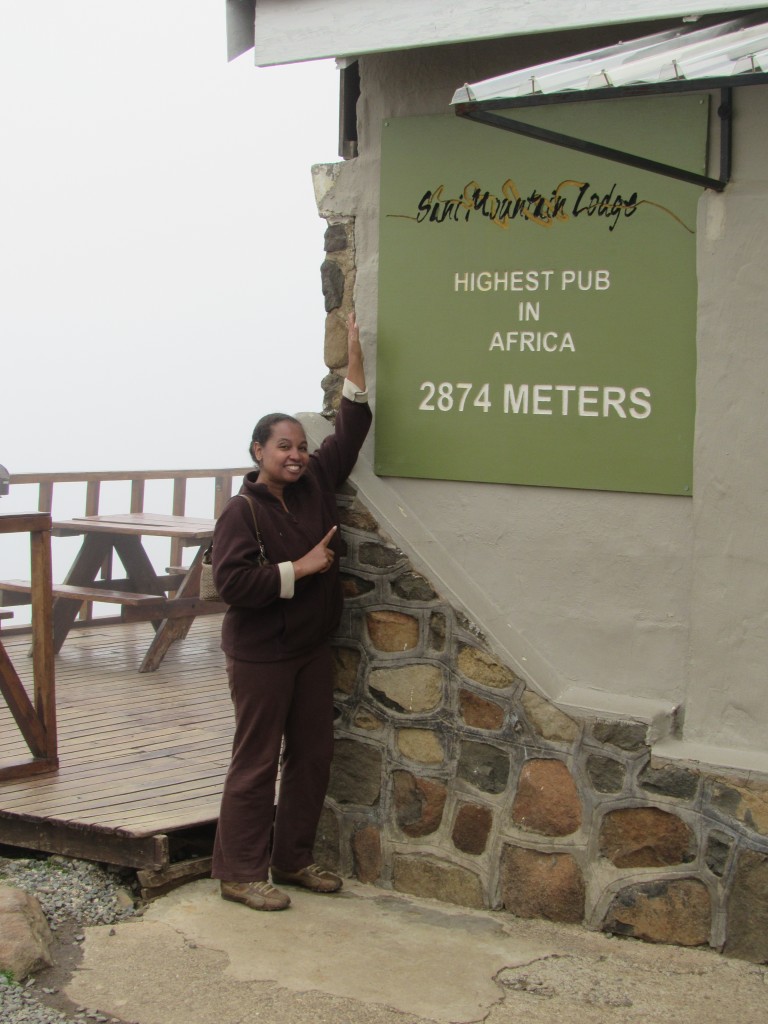 Me at the highest pub in Africa 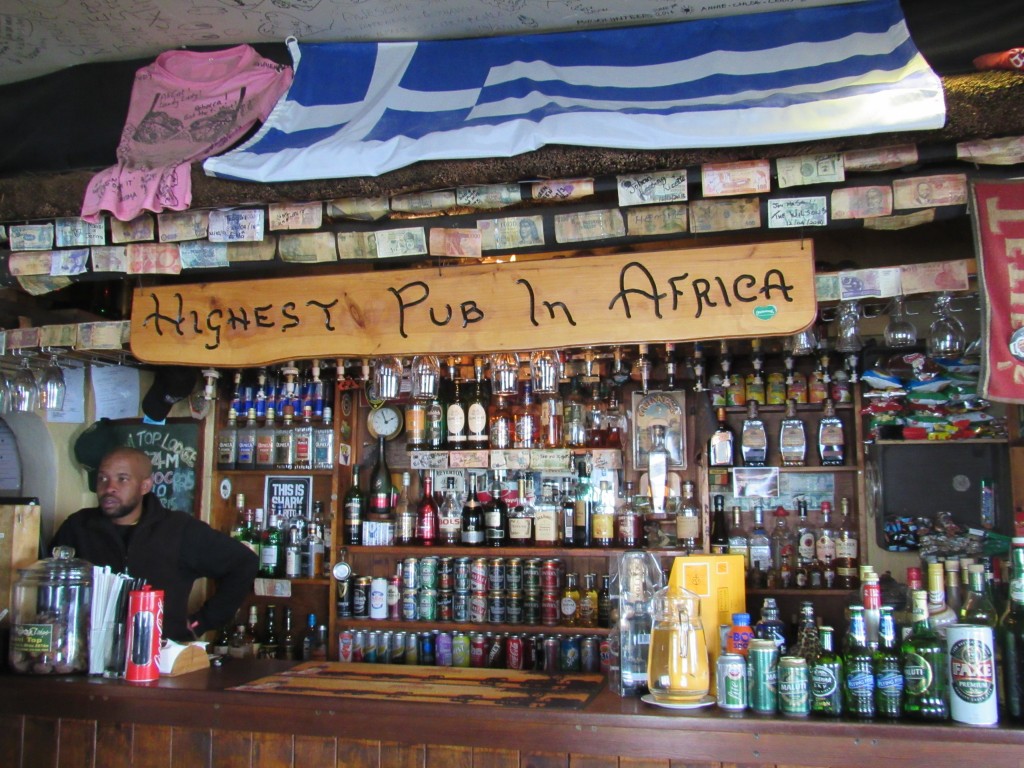 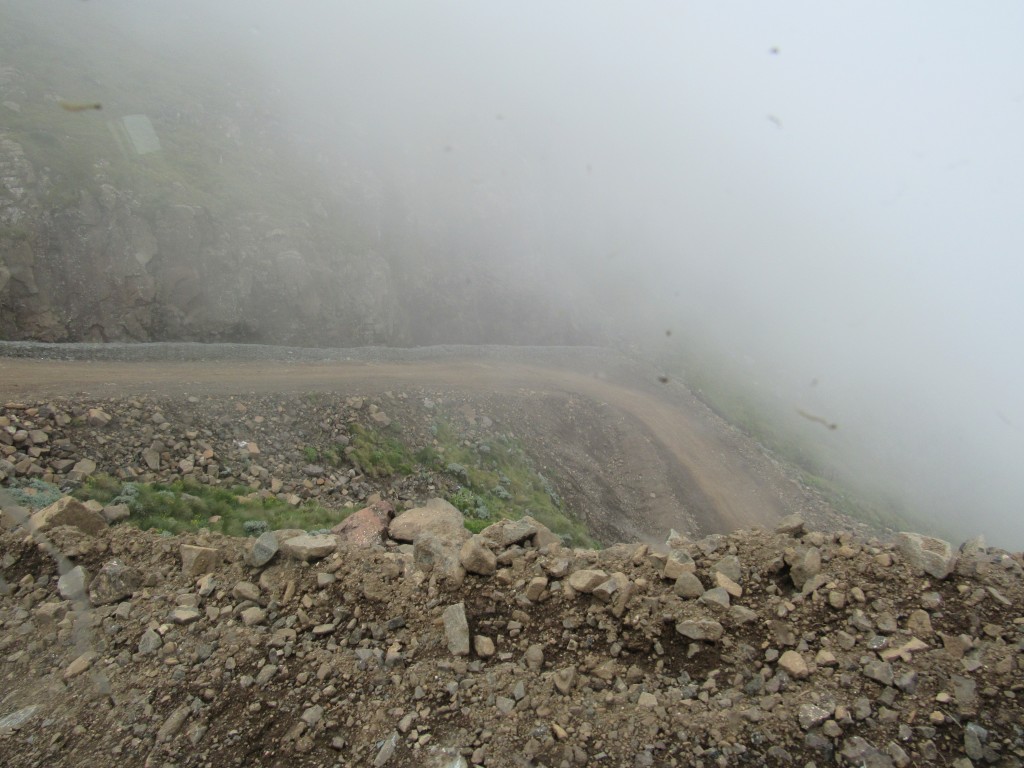 Cloud cover on the Sani Pass

Have you ever visited Lesotho? If so, what did you think?  Please share your comments below.