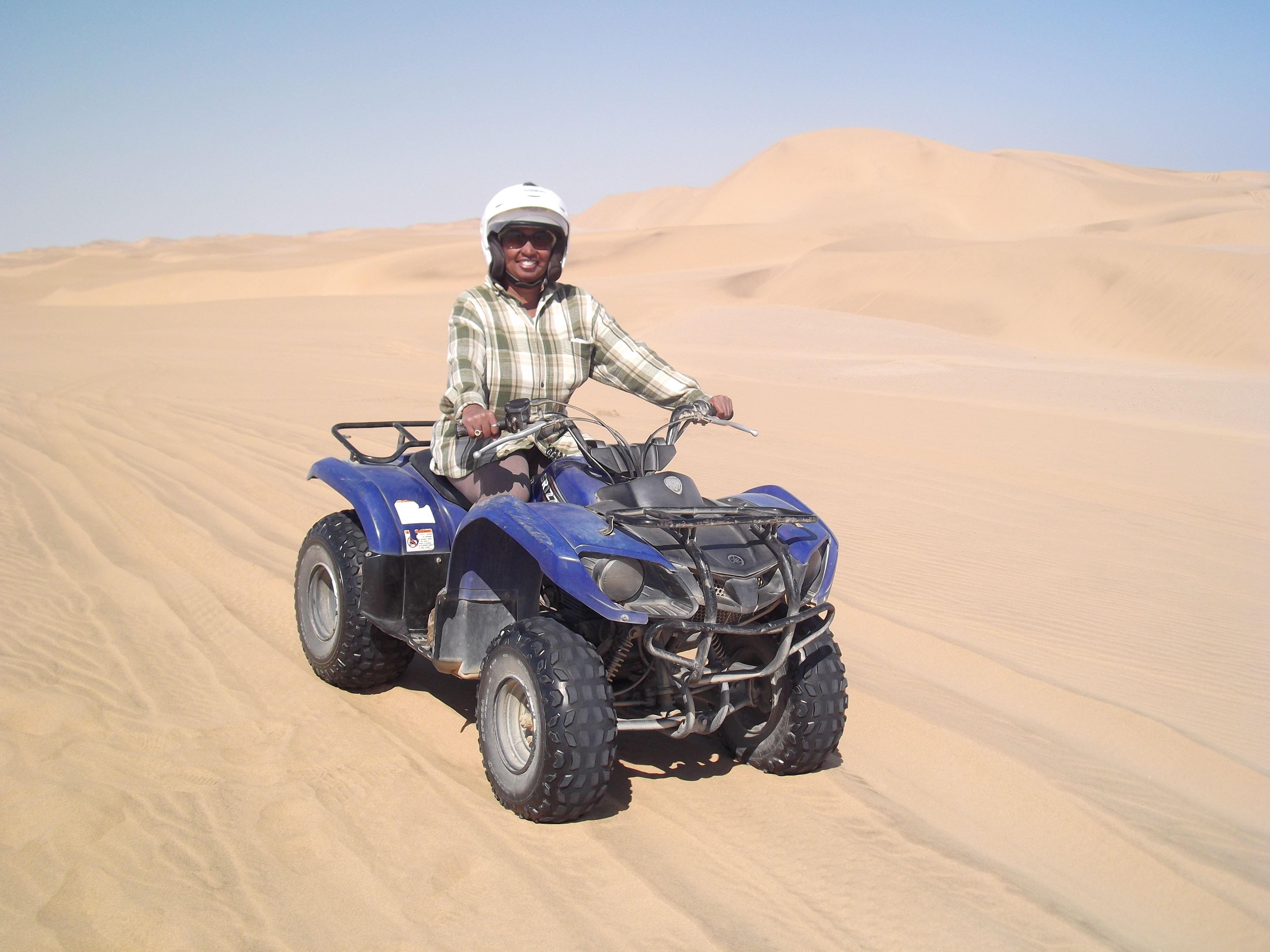 I ate a hot cooked breakfast, then left around 9:00 am for my quad biking and sand boarding tour. Lucky for me, I was the only one scheduled and it turned into a private tour.  I was fitted for a helmet, then my guide and I hit the sand dunes, riding along a set trail so we wouldn’t injure or kill the protected wildlife there. The landscape was magnificent, but I was hopelessly lost as we traveled deeper and deeper into the maze of sand dunes. 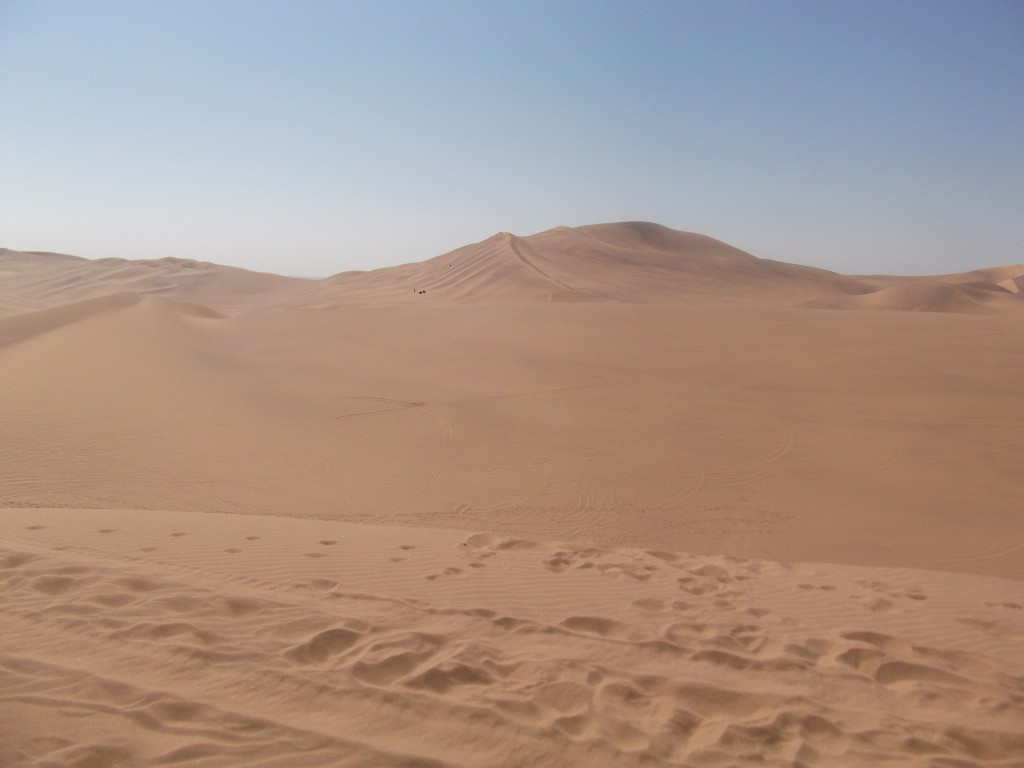 About an hour later, we stopped at one of the larger dunes for my sandboarding adventure.  Since it was my first time, I had chosen the “Lie Down” sandboarding style (where you lie on the board and ride the dunes headfirst). My guide waxed the board and rubbed it with sand to prepare it for riding. Then he had me lay down on the board with the front slightly raised and my feet hanging over the back. I was a tad bit nervous and briefly questioned my sanity as I looked down. But I gave the OK and my guide nudged the board sending me off. My adrenaline kicked in as I sailed down the dune at breakneck speed.  The ride was exhilarating but over in seconds, and I had to hike back up the dune (which was a chore).  I rode down a second time and luckily this time my guide rode me back up on the quad bike. 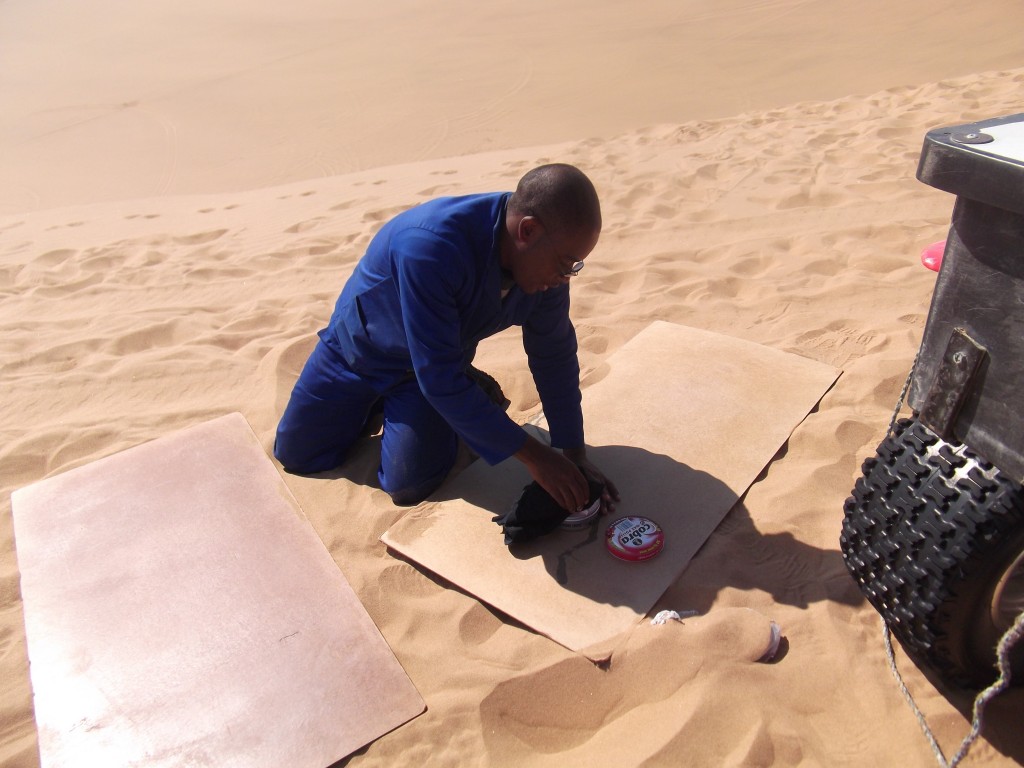 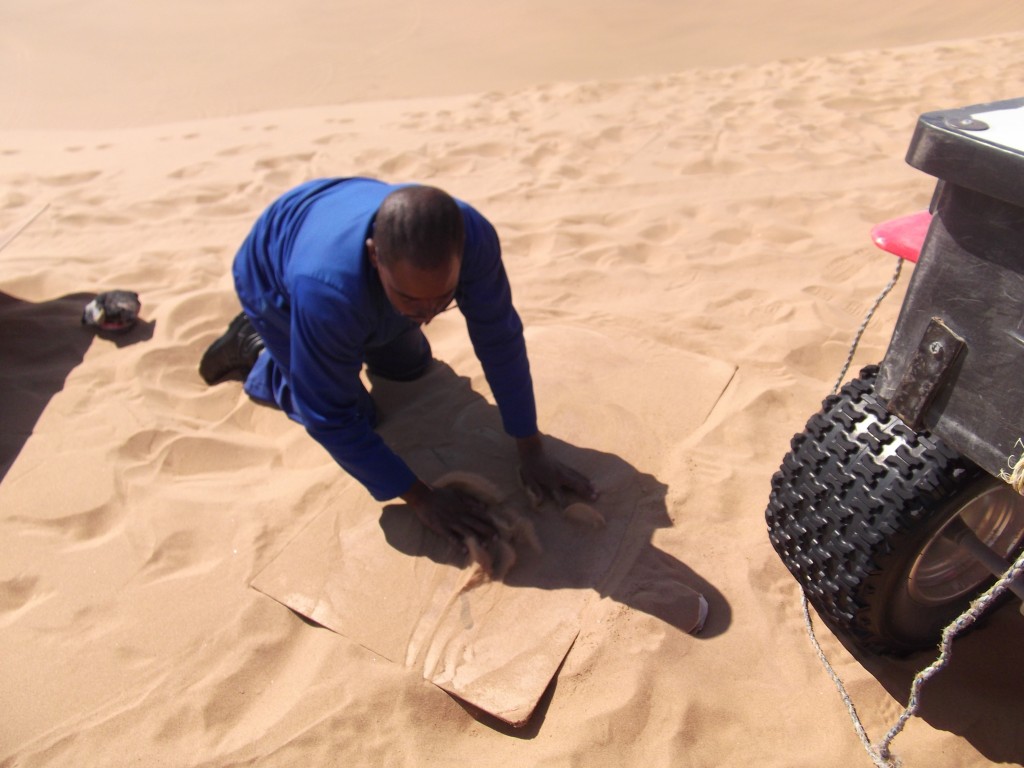 Smoothing the board with sand 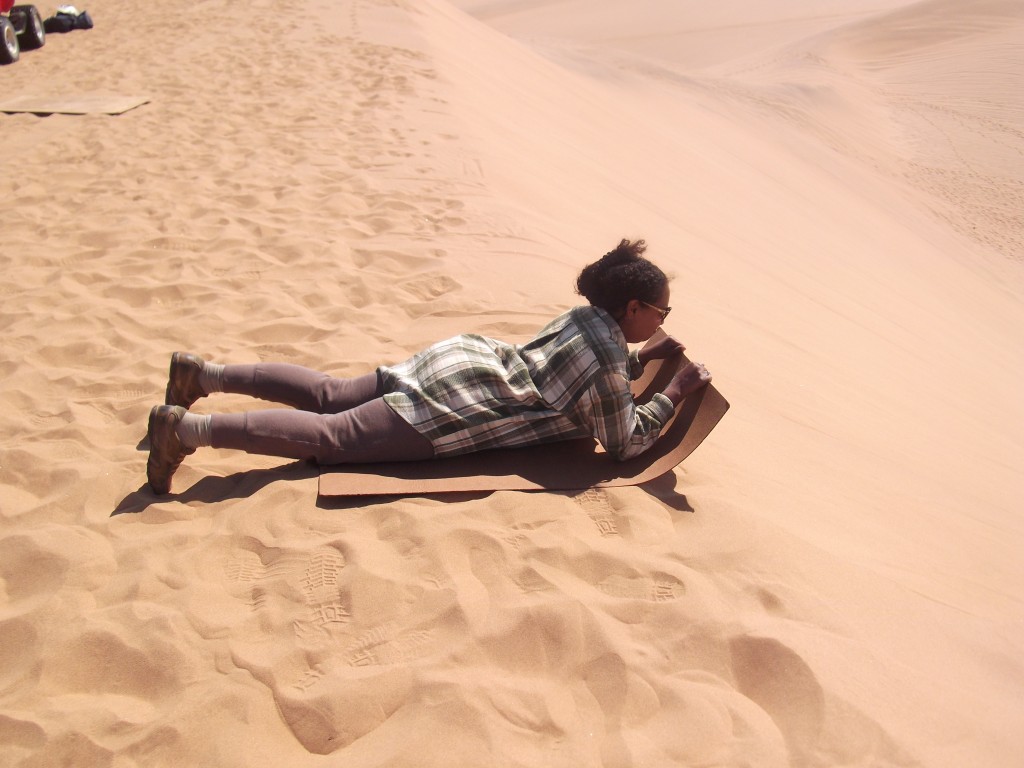 After two runs, I’d had enough sand boarding and so we took off on the quad bikes to search for desert wildlife. The desert appeared lifeless at first glance, but upon a closer look it was alive with a variety of desert-adapted wildlife. My guide pointed out various hidden animals, including geckos, lizards, beetles, and spiders. The final highlight was seeing where the edge of the desert meets the Atlantic Ocean. 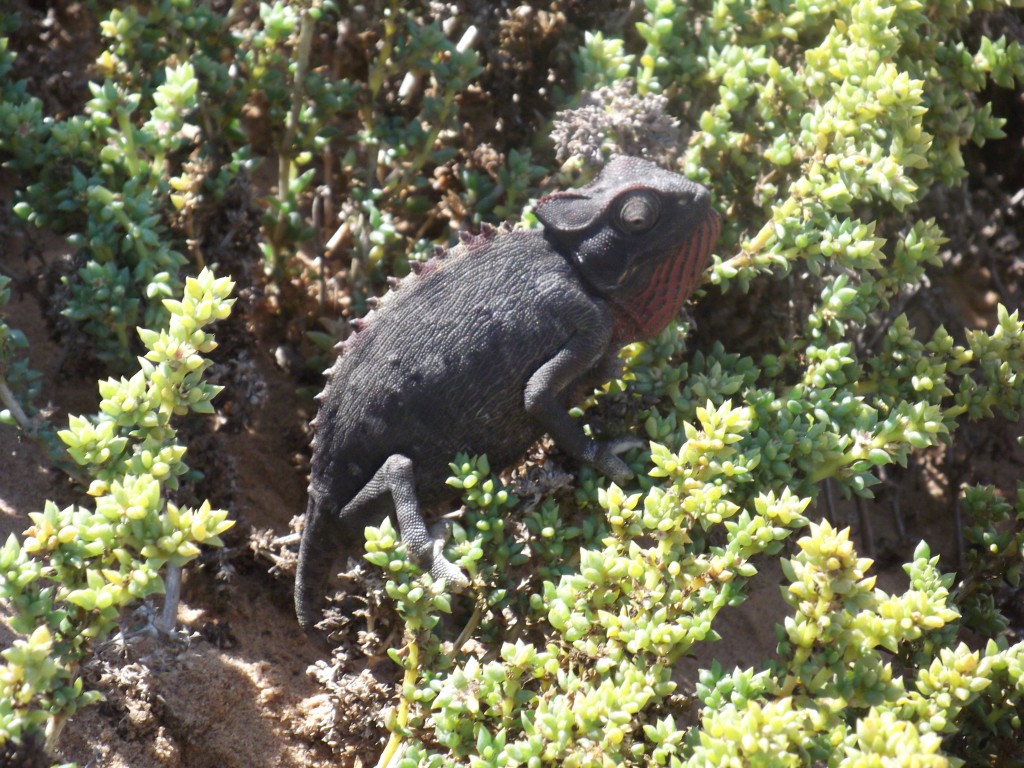 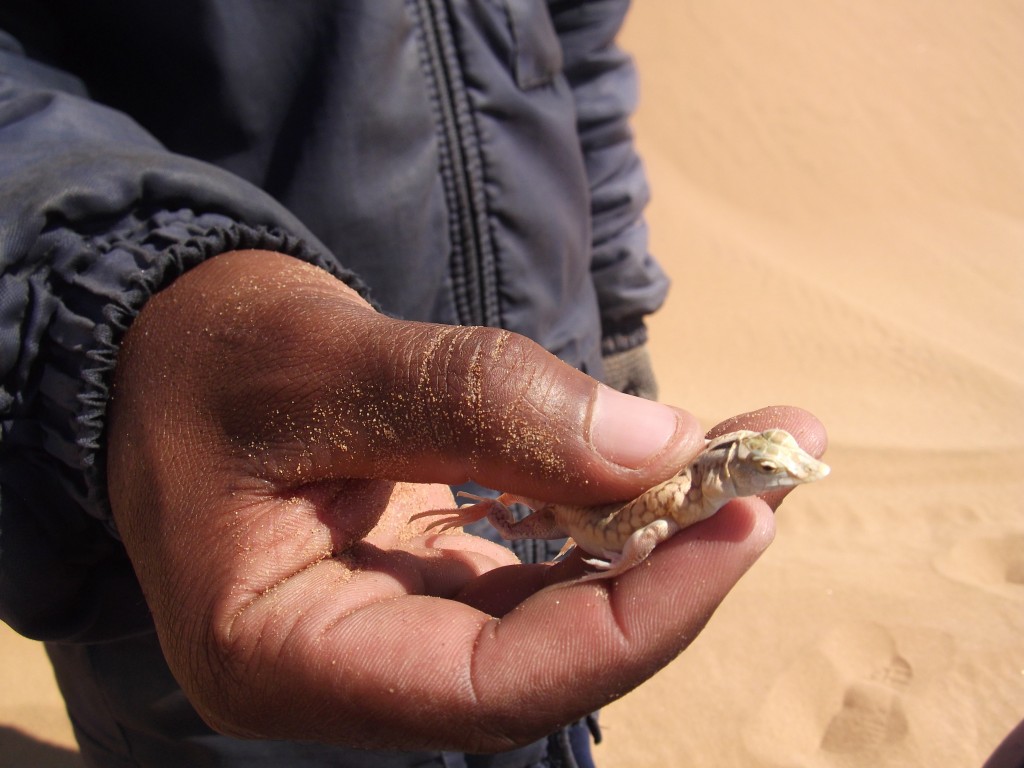 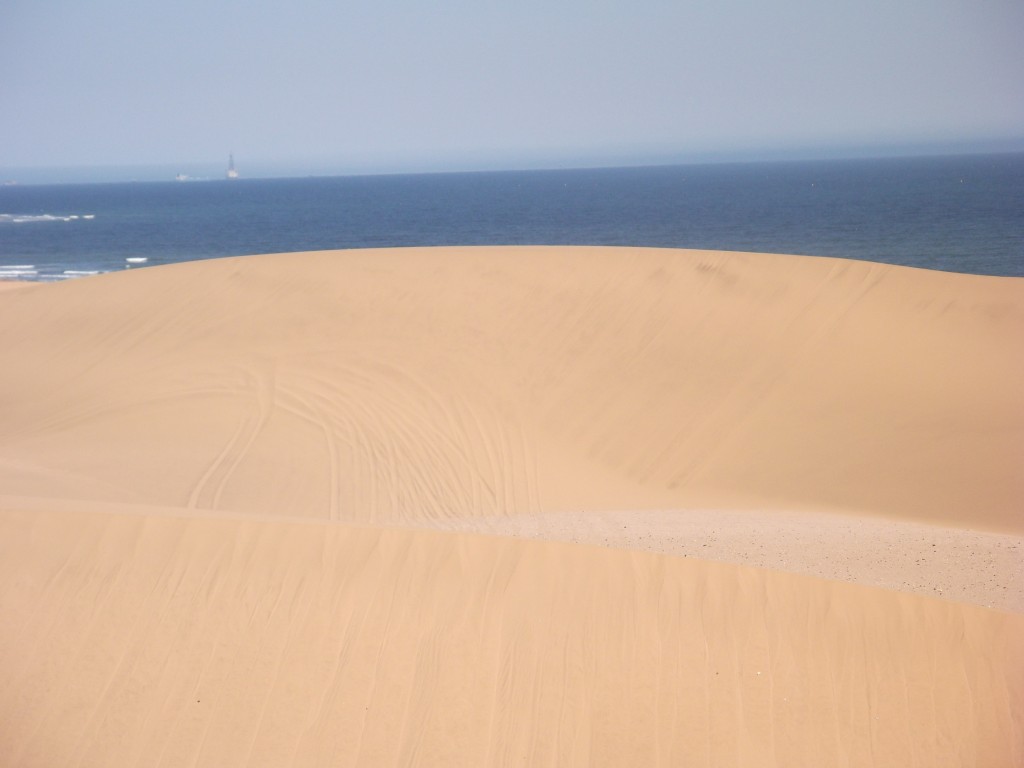 The desert meeting the sea

By the end of the ride, I was dirty, full of sand, and ready for a hot shower. After freshening up, I headed off to explore the town of Swakopmund. Situated on Namibia’s coast, Swakopmund is like a little Deutschland in Africa. The German colonial influence is present in the architecture and general ambience, and many of the retail stores and restaurants are German-owned. 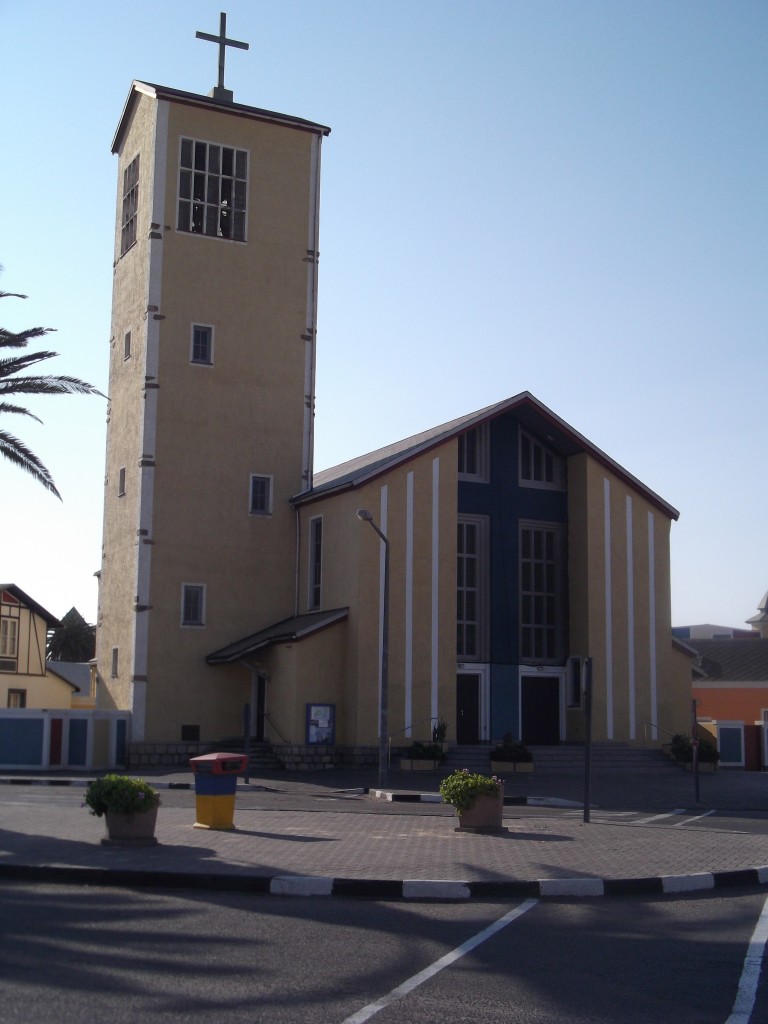 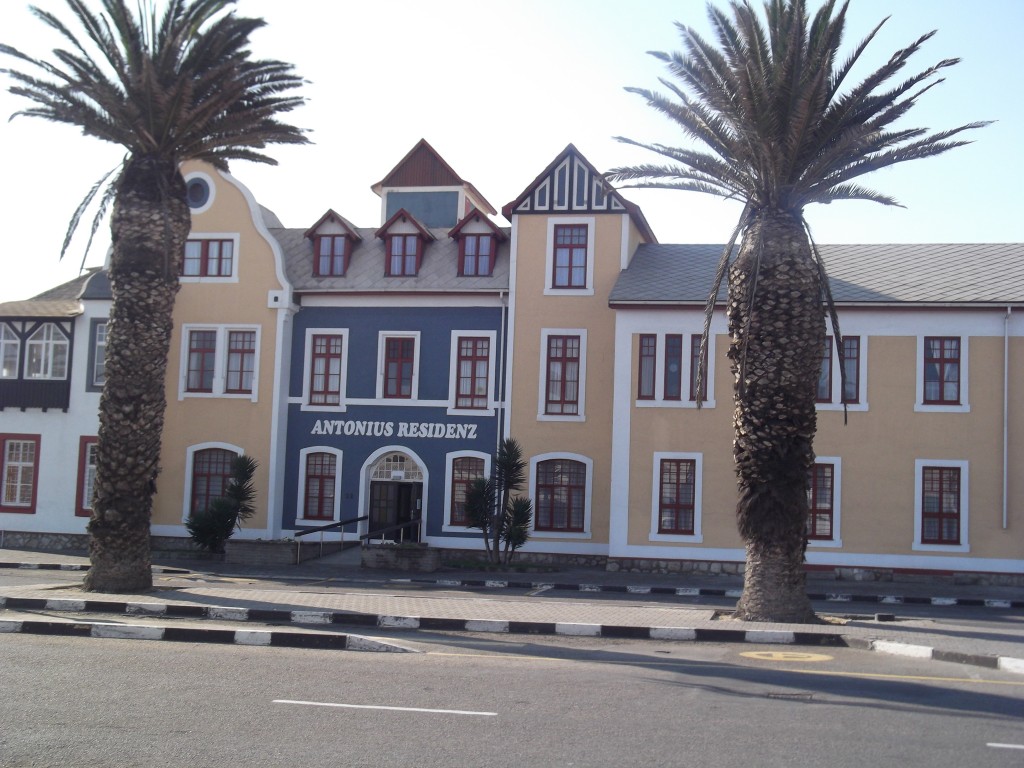 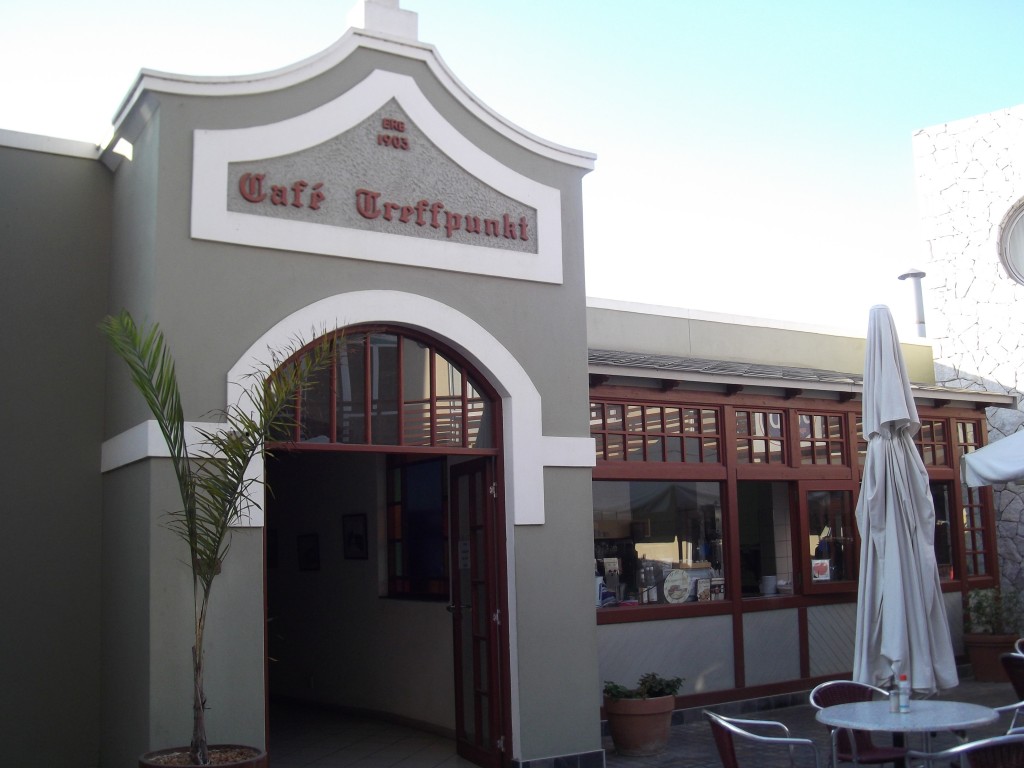 I had worked up a serious appetite and stopped for lunch at The Fish Deli, a local seafood restaurant, where I ate fried hake and chips. Later, I walked the sea-front promenade, eating homemade ice cream while viewing the jetty, lighthouse, and exquisite waterfront homes in the area. I would be remiss if I didn’t admit I had mixed emotions about these obvious remnants of colonialism and apartheid. 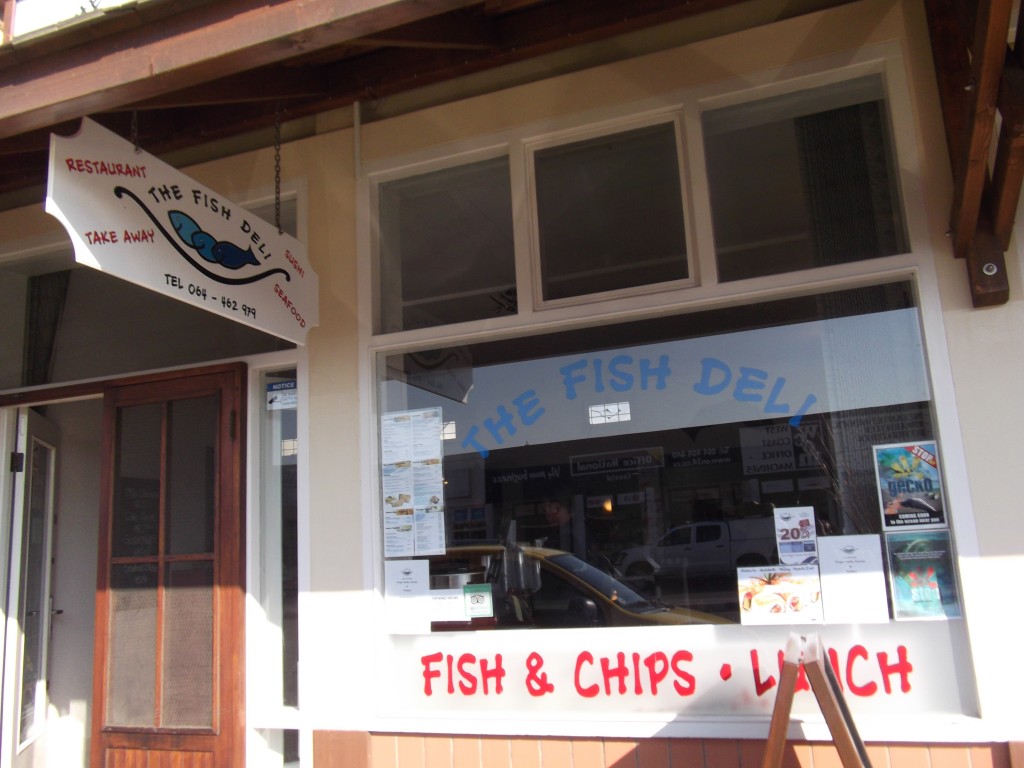 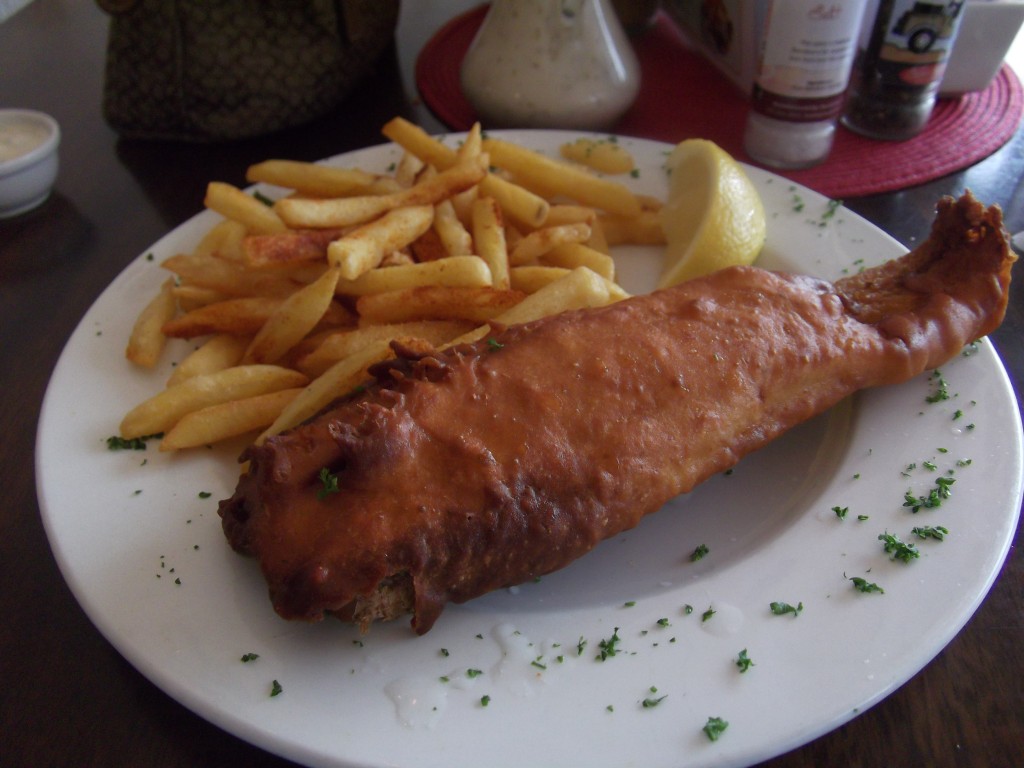 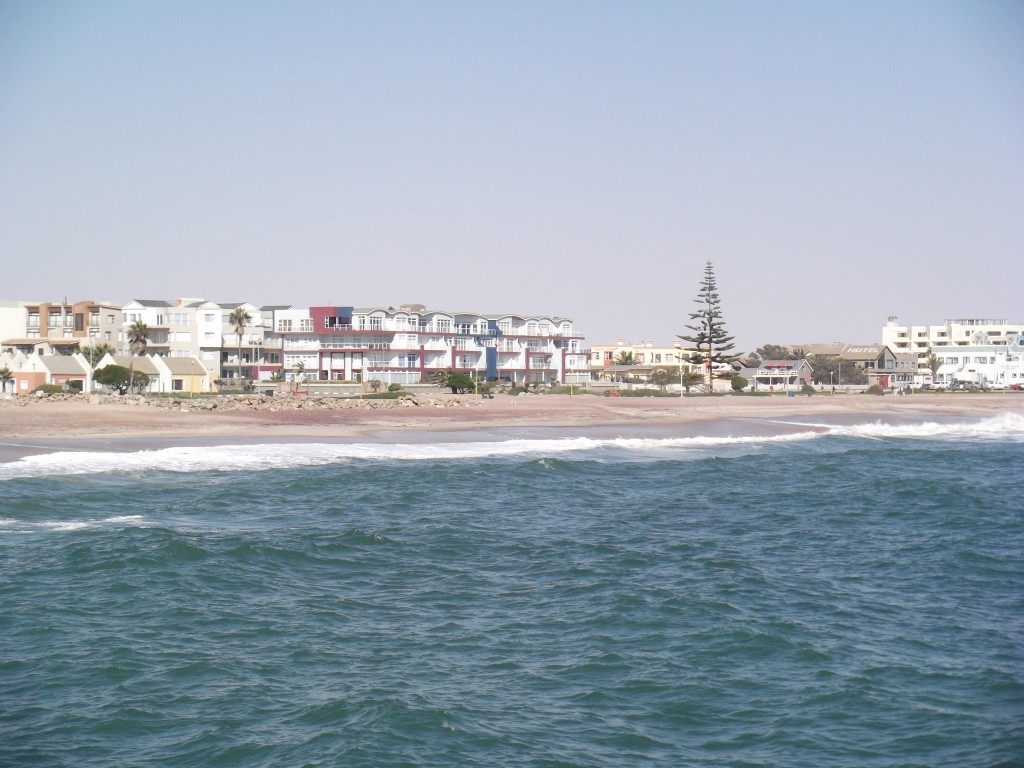 I spent the last evening talking with one of my tour guides, Alfons, a native Namibian. We talked about past and present Namibian history, his heritage as a member of the Herero tribe, his multilingualism (English, Herero, and Afrikaans, which was required during the apartheid period), and his future plans to return to his village in northern Namibia.  I left with a greater understanding of Namibia’s storied past and rich culture, and a strong desire to see more. I look forward to returning.

Have you been to Swakopmund, Namibia’s adventure capital?  Did you participate in any adventure activities?  Share your comments below.