Elmina Castle was built as a trading post by the Portuguese in 1482. Its lower chambers were originally used to store gold and other commodities before shipment to Europe. Centuries later, it became a hub for the trans-Atlantic slave trade and those same chambers were used to store a more valuable commodity – African slaves. As a black American and descendent of African slaves, I’ve always been curious about my roots and how my ancestors got to America. And so, I decided to end my first trip to the African continent with a tour of the slave castles along Ghana’s former Gold Coast. 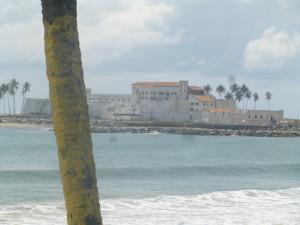 View from the Atlantic coastline

As we drove up the Atlantic coast, the large, imposing white castle came into view. The sight of it brought on a feeling of unease. When we finally arrived, I walked around and stood outside for a minute to take it all in. As I was in my moment, several locals walked up to me trying to sell various goods. By the third one, I was quite annoyed and yelled “NO, leave me alone.” I’m not normally that rude, but I was upset by the disturbance of my moment of reflection. It seemed to do the trick and I went back to my moment. Finally, I took a deep breath and walked across the drawbridge to enter the castle. Once inside, I was told there was an entrance fee of $10 USD for foreign adult visitors. I didn’t like it, but I sucked it up and paid the fee. When I learned there was an additional fee of $10 USD to take inside pictures or videos, I declined. 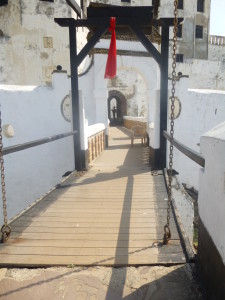 My visit began at the small museum which detailed the history of the castle and the various colonial powers who controlled it for nearly 500 years. Surprisingly, there wasn’t much information about the capture and sale of African slaves by African traders. Likewise, there was little information about the trans-Atlantic voyage, the people of the African diaspora, and the aftermath of the trans-Atlantic slave trade.  These stories are so inextricably connected that it was unfortunate the full narrative was not told.

Next, I went on a guided tour conducted by a local Elmina resident. The tour guide was knowledgeable enough, and as we walked through the fortress he described the inhumane conditions the slaves endured before they made the voyage to the Americas. We started at the women’s dungeon, which at full capacity held up to 400 women for as long as four months while they waited for a ship to arrive. They were fed once a day and sometimes not at all. They were not allowed to bathe and were forced to live in their own urine, blood, and excrement (a faint smell still remains present). Death and disease were common. As I stood inside the room with no windows and minimal ventilation, I visualized all of those women in that hot, cramped, smelly space with barely enough room to sit, let alone lie down. I tried to imagine what they felt and what they were thinking. My emotions finally overtook me and the tears began to fall. 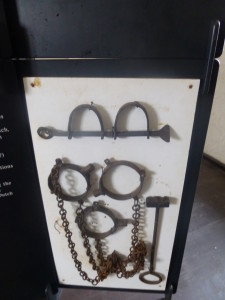 Just outside the women’s dungeon was a courtyard with a staircase leading to an overhead balcony; this was part of the governor’s chambers. The tour guide explained that the women were paraded out of the dungeon while he looked over the balcony and chose one as his concubine. The chosen woman was cleaned up and fed, then led up the staircase to the governor’s chambers for him to have his way with her. The women were regularly raped by the governor, soldiers and other officials. Those who became pregnant were “lucky”; they were freed and housed in town, and their mixed children were educated. Those who resisted were severely punished; they were chained to a heavy ball in the courtyard and forced to stand all day in the sun with no food or water.

From there we went to the men’s dungeons, which held up to 600 men and were similarly dark, damp and disgusting.  The men’s dungeons were closest to the infamous “Door of No Return”, where the slaves were taken to waiting ships. The entrance to that tunnel was so short we had to duck to avoid hitting our heads.  I surmised the size was purposeful because this was where the slaves took their last steps on African soil, and where they were most likely to resist. Several visitors had left flower memorials there in their honor.

Next, we went to the upper levels, which contained the kitchen, soldier’s housing, suites for visiting officials, and the governor’s wing. In stark contrast to the dungeons below, the governor’s quarters were spacious and airy with beautiful ocean views. Surprisingly, there was also a church directly above the room of no return. The irony wasn’t lost that these captors worshiped above the space where they held other humans in captivity and broke so many of God’s commandments.

The tour ended at the “condemned cell”, which had a skull and cross bones above the door. This was where male slaves who rebelled or resisted were imprisoned in a windowless, ventless chamber and left to die with no food, water or air. You can still see scratch marks on the wall, signs of their desperate struggle to survive. Outside the cell was a plaque which read: “In Everlasting Memory of the anguish of our ancestors. May those who died rest in peace. May those who return find their roots. May humanity never again perpetrate such injustice against humanity. We, the living, vow to uphold this.” I can only hope that this history never repeats itself. 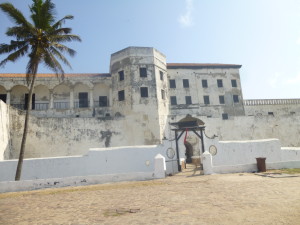 My visit to Elmina Castle was an incredibly emotional event (which I relived as I wrote this post). I had learned about the horrors of the trans-Atlantic voyage and slavery in America, but never realized how horrendous the experience was before the slaves left the African shore. Reflecting back, it was humbling to realize that I’m descended from some amazingly strong people, and if they could survive through that horrific experience, I can make it through any of my comparatively small troubles. Moreover, it was liberating to be able to go back there to pay homage to the ancestors and show that their captors did not win. It was a life changing experience I’ll never forget.